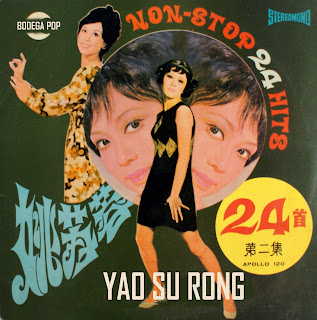 Listen to "Steal the Person of the Heart" 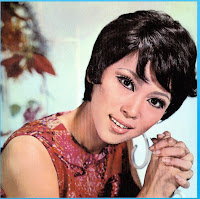 I got the double CD from whence the 24 songs that made the final cut originally appeared at the Flushing Mall in, duh, Flushing. It was actually part of a four CD set; I posted the other two CDs--songs by legendary 30s singer Zhou Xuan--here. (I originally posted a 30-song selection back in May 2012, without a cover and in random order. I've gone back and spruced things up, including giving you the often oddly-translated English titles instead of the Chinese, as I had last time. Plus, c'mon, look at that cover.) 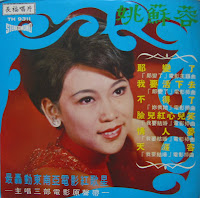 I had no idea how hard Yao Su Rong was going to rawk; in fact, Zhou Xuan held my attention for months before I really gave Yao Su Rong a proper listen. Part of the problem is that about a quarter of the songs in her collection, which is mostly made up of 60s and 70s classics, are absolutely godawful unlistenable atrocities from the 80s and 90s, even to a pop gourmand like me. (I took the liberty of removing those songs from the present mix; trust me, I did everyone a favor by doing so.)


Here's her bio from Last.FM:

Yao Su Yong (sometimes Yao Su Rong) was born in 1946. Her breakthrough came in 1969, with the title track to the movie “今天不回家” (Today I Won’t Come Home). That one song swept her into fame, the song being sung by young and old alike, securing her a much-coveted Hong Kong record deal with 海山 (Haishan Records), selling 600,000 copies.

Before that, she’d been singing songs for a while, a minor hit being a Mandarin-language rewrite of a Japanese popular song, “負心的人” (Cruel-Hearted Lover). No longer would she have to worry about success — instantly, she was selling out shows and getting invited to concerts all across the Mandarin-speaking world.

Certainly, her catalog is extensive, with over 200 recorded songs.

On August 18th, 1969, Yao Su Yong sang at a packed crowd in Kaohsiung, southern Taiwan. The audience was crazy about her, cheering madly every time she appeared on stage, and pleaded and begged her to sing some of her banned songs. Initially, she declined as politely as she could, saying that she was not permitted to perform those songs, and that she hoped the audience would forgive her. However, the requests wouldn’t stop, and eventually, she sang “負心的人”, hoping the popular appeal of her song would override any official censorship.

Unfortunately, the police guards stationed at the theater didn’t agree. They called her offstage and questioned her, asking her to record her playlist and make an official confession. Failing to produce a playlist, her singer’s license was revoked, “leaving no door or window” open. Since she was no longer allowed to perform in Taiwan, she turned to Hong Kong and Southeast Asia to continue her career.

Now, she lives a quiet life in Singapore. Though Taiwan officially invited her to perform at the 1998 Golden Horse Film Festival (the biggest movie event of the island, government sanctioned), she politely declined, saying that now that her life was peaceful and stable, she preferred to remain out of the limelight. However, her legacy lives on. “Jin Tian Bu Hui Jia”, the movie, was remade in 1996, but still used her original song. Her records continue to be very popular, and her status in the annals of Chinese oldies divas is well-secured.

Most stunningly excellent!!!! And thank you for axing the atrocities, you're 1 of the few people I trust to prune :-)

Brilliant! So much good music coming from everywhere lately! You sharing one killer album after another killer album - only I wished a day had 25 hours to listen to all these great music. Keeping up with all the good music out there is like trying to catch your own shadow... I am currently living/studying in China. You and Hammer from Audiotopia are actually kinda inspiring me to rip some Chinese music and share it on my blog... In my opinion 99% of the music I hear in China these days is more or less unlistenable, but there are for sure some pearls hidden: nice beautiful music, great lyrics, nice sounds... DubMe

Thanks for the vote of confidence, Holly. Just as FYI, here's one of the songs that didn't make the cut:

Was I wrong to withhold it? (If so, I can certainly be persuaded to put all of the songs back in.)

Dubme, where in China are you? And, yes, please I really wish you'd post some great Chinese music.

Oh, please, please, please do NOT put any songs back in...please. Oh dear. That's 15 seconds I can't get back! Ugh. And she's SO talented, so sad she had to put up with material of that nature. Thanks again for *your* exquisite taste.

Gary - I am currently in Chengdu, which is the capital of the Sichuan Province. And - once I am done with my thesis I will share some compilations with Chinese music - and also rip some of the CD's of Chinese artists I enjoy... Cheers!

GREAT stuuf. THANK - YOU. But, the Zhou Xuan post you mention here, from back in 2012, has bad links. CAN YOU please re-up that for us???

I've got a backlog of things that need posting, but, yes, Zhou Xuan will go back up soon.

... in the meantime the Zhou Xuan link is pointing to something else well worth listening to, I see! Thank you!!

Aha, thanks for the alert, David. I've fixed the link -- at least, in the sense that's it now pointing to the Zhou Xuan collection.

I'm reripping those CDs now and will repost later this evening.

The China A Go Go thing is another matter -- I basically need to create a whole new mix out of scratch.

Thank you for the reupload! I just picked up a record of hers in Hong Kong. Excellent singer!

Hey, do you think you could re-up this one if you get a chance? It looks like its the only one of the BP comps that says it's private.

And for what it's worth, thank you so much for everything you've done with this blog! The Asmahan, Leila Mourad, and Yellow Music comps have been amazing to experience, and it's blogs like yours that make me grateful for the internet.

Thanks for the kind words, Frank. I've fixed the link.

Grab it now; I'm not sure if it'll last!

Gary, do you have any recordings from Chang Siao Ying (A.K.A. Zhang Xiao Ying) from the 1960s and 1970s? Oddly enough Yao Su Rong and Teresa Teng have several 1960s albums available for digital download on iTunes, but Chang Siao Ying only has cheesy remixes...

Yes, I think I do -- I'll have to check and see what I've got -- may have picked some up in Thailand last year