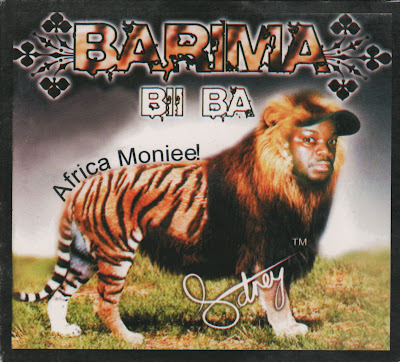 YES, Mr. or Ms. Smartypants, the music most certainly DOES live up to that admittedly very, very special cover. You're looking at Sidney, aka Rap Ninja, Ghana's most controversial hiplife artist, a man who recently changed his name, speaking of man, to "Man" ("Barima" means "Man" in Twi).

This super-delicious offering was plucked from a Ghanian bodega at 96-07 57th Avenue in Lefrak City, Queens. Along with a number of other seriously delightful things that, if you're nice, I'll consider sharing in the days and weeks to come. ... 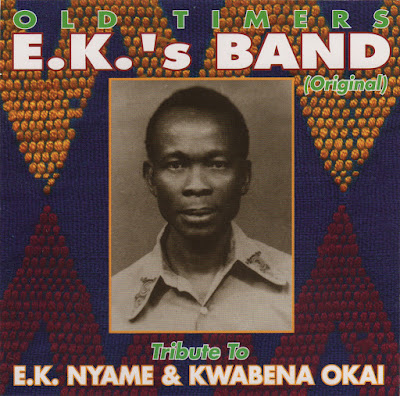 What can I say? Today, Jesse from Afropop Worldwide, his girlfriend, Hil, and I drove out to see about interviewing Blessing Udeagu, the owner of the eponymous shop where I found most of the Nigerian music I've shared here in the past. While we were there, Blessing's daughter told us about another place to find African music, around the corner, down the street, and a couple of blocks east.

The market -- the name of which I've forgotten, but which was something like Gift Toca -- had a locked wall-mounted display sparsely populated with a few sun-blued CDs ... and then, a few feet away, across the from the checkout counter, a whole table filled with smallish box after box of mostly Ghanian CDs. I bought ... let's say that I now have a verging-on-respectable collection of Ghanian music. Key word "verging," but still.

Take this collection for instance. Holy Effing Expletive. Terrific Ghanian music from the 1950s and '60s. Take a quick listen, if you need aural proof before clickin:

See? Told you. Now, next time I offer up a free Ghanian album and am all like "This is some sweet fine la musica, mon ami," are you going to hesitate before clicking? 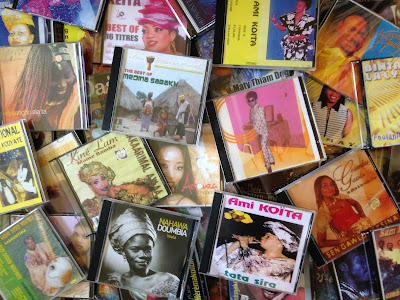 On Wednesday, June 24, Bodega Pop Live on WFMU's Give the Drummer Radio spun three hours of pop, hip hop and traditional music from Gambia, Guinea, Guinea-Bissau, Ivory Coast, Mali, Nigeria and Senegal ... all from CDs recently plucked from the shelves of African bodegas and video stores in Jamaica, Queens and Harlem.

Listen to the show in the archives
Posted by Gary at Wednesday, June 24, 2015 No comments: 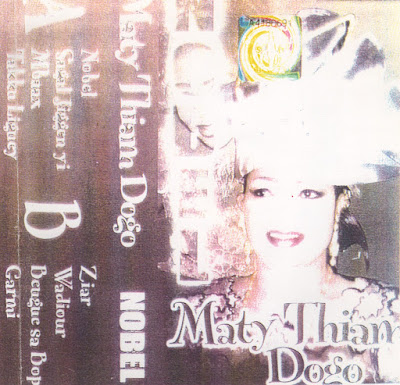 Maty Thiam Dogo was born in Dakar in 1965 into a fairly musical family. By the time she was 15 she was singing backup with her maternal aunt, Soda Mama Fall. I found this cassette-to-CD transfer of her fourth and last album in a bus terminal video store off 165th Street in Jamaica, Queens, last week while out searching for music and potential interviewees with two guys -- Jesse and Sam -- from Afropop Worldwide.

It took us well over an hour to find the video store in question, in large part because everyone we asked -- and we asked people in Jamaican music stores, hair salons, clothing stalls, and cell phone stores -- everyone had a different idea as to where we might find sellers of African tapes and CDs in the neighborhood.

More about this and similar excursions -- and more booty -- in the days and weeks to come ... 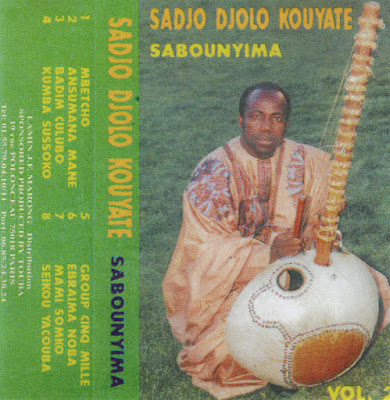 I've been a very neglectful bodega proprietor the last year and half, and for that I apologize. I can't make any promises moving forward, but certainly my lack of activity here -- other than the occasional re-up and weekly Bodega Pop Live show advertisement -- has been weighing on me. Also, I've gotten out and exploring neighborhoods again, thanks entirely to the fine people at Afropop Worldwide, who are currently putting together a show slated for mid-July about African music in New York City. (More to be revealed closer to the date.)

In other words, I've kind of been picking up a LOT of new music recently. Which may -- and I want to stress that word "may," given my recent history -- may mean a series of new posts over the next couple of months.

So, about today's offering.

I found this cassette-to-CD-transfer at a terrific African movie and CD shop just off 116th Street in Harlem's Little Senegal. The owner, a DJ who I am planning to have on my show sometime in the coming weeks, opened up shop in 2010 and carries a diverse selection of music, from his native Gambia as well as Guinea-Bissau, Nigeria, Mali, Ghana, Senegal of course, and Jamaica. I am no doubt forgetting several other countries. The music ranges from traditional to reggae to hip hop to straight up pop. He's there 7 days a week, yet still manages to create dozens of his own mixtape CDs (also for sale in the shop) as well as gigging the occasional party, wedding or other community event.

I know nothing about Sadjo Djolo Kouyate, other than the obvious: He's from Guinea-Bissau, he sings and plays the kora, and he's played gigs as far away as London:

I'd offer you a sound sample from the CD itself, but Divshare has changed its policy and now requires you to be a paying user to use their services, including the hosting of MP3s, for which I'd previously relied on them. Oh, well. If you'd like to hear it, grab it. (Caveat: Tracks 2, 3, and 4 are in mono -- in the original recording, the left channel dropped out mid-way through track 2 and reemerged near the end of track 4, so I collapsed the stereo into mono for those three tracks in Audacity. You're welcome.)

And stay tuned ... I've got dozens more CDs from Little Senegal, as well as jaunts out to Jamaica, Queens, and the south Bronx.

[Originally published on April 13, 2012.] I'm in an incredibly good mood this evening. Not only did I finish three ridiculously complicated projects this week at work, but I got the final confirmation (date, time and location) of a reading I'll be giving one week from tonight in Washington, D.C., with one of my all-time favorite poets, p. inman.

Although it's the first reading I've given in a year (and you can listen to that previous reading, here, if you scroll down to April 23, 2011), I'm frankly more excited about getting to hear and watch inman than I am about reading any of my own stuff. Inman may not be the most famous poet associated with the Language Writing movement that came into prominence in the 1970s & 80s, but he is certainly the most radical. And, as far as I'm concerned, the finest. He is the Melt Banana of poets. Check out, for instance, this comic I drew in 2009 using his words (and Sugiura Shigeru's images): 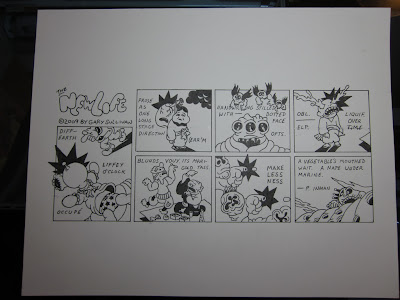 Which brings me to tonight's musical offering. As many of you know, I'm a huge fan of Japanese pop and rock (including, yes, Melt Banana). Most of what's on my computer, and thus on my iPhone, is J-pop and J-rock that I either found while on vacation in the archipelago, or downloaded from one of the many Japan-focused music blogs I've been scouring over the last several years. 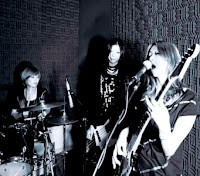 Without question, my favorite still-active J-rock band would have to be the all-female trio, Noodles. Formed in 1991 in Yokohama, Noodles has clearly drawn the bulk of its inspiration from American bands of the same period, especially post-punk and grunge acts like Nirvana and the Breeders. But they are, IM (not so) HO, more satisfying than either.

Blasphemy? Perhaps. But consider this: Whereas Nirvana collapsed after only a few albums with Cobain's suicide and the Breeders never managed to put together that many more albums, despite none of its members actually having died, Noodles, like the Energizer Bunny before them, keep on going and going ... and going. And, inexplicably, getting better and better ... 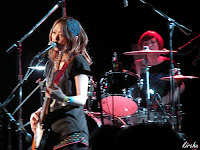 No matter what sort of mood I'm in--from "Pretty Okay" to "Utterly Defeated"--it doesn't take more than two or three Noodles tracks to push me up to "Ecstatic," or, at the very least, "Hey! Wow!" I love, love, love, love, love this band, with its Stolen From College Rock Radio hooks and structures and its macaronic lyrics and its obsessively alt-rock-referential titles ("Slits," "New Wave," "Velvet Underground," "Runaways," "Splash," "Lemon Grass Foo Foo").

810 MBs is, admittedly, an almost egregious commitment to ask of you. But, then, ask yourself: Has the Bodega Pop proprietor ever steered you seriously wrong, yet? If you have any love for J-Rock, if the 90s were over far too early for your liking ... give this one a try. You won't regret it. 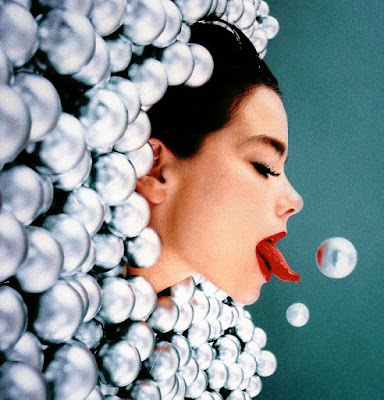 Listen: Bodega Pop Live on WFMU's Give the Drummer Radio celebrated women avant-gardists, rockers, folk heroes and rappers from Brunei, Haiti and Iceland to the Philippines, Sri Lanka and Tanzania.

Listen to the show in the archives
Posted by Gary at Wednesday, June 17, 2015 No comments:

TONIGHT from 7-10 PM EDT, Bodega Pop Live on WFMU's Give the Drummer Radio will spin three hours of rock, soul, hip hop, disco, funk, electronica and pop from the Arusha region of Tanzania to the banlieues of Paris.

Listen to the show and join the conversation!

HOW GERMAN IS IT? On air now 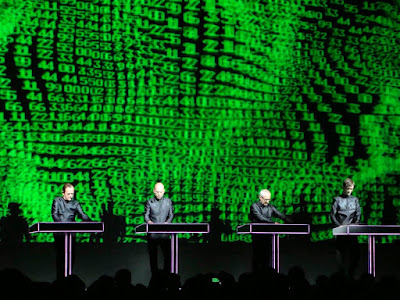 LISTEN: Bodega Pop Live on WFMU's Give the Drummer Radio spun three hours worth of popular and forgotten Kabarett, Liedermacher, Ostrock, Volk, Schlager, Neue Deutsche Welle, Hamburger Schule, Eurodance and -- sure, twist our arm -- some of our favorite Krautrock tracks.