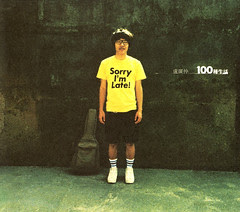 Found in P-Tunes & Video, the super-fabo vid/CD store on Chrystie Street in Manhattan featured in this blog's header image.

Anti-star Crowd Lu has, ironically, risen to mainstream popularity in Taiwan at least in part due to his bowl haircut, nerd glasses, and general dorkiness. He also writes very smart, catchy pop music. It reminds me a bit of Jonathan Richman, Alex Chilton and, golly, any number of mainstream 60s AM radio artists I can't remember at the moment.

Dude! Dudette! Take a stab at the first song on the playlist and then "Boring," which I think is the third.

I love it! With lots of special super dork emu rainbow glitter hearts swirling around (the love).
Posted by Gary at Friday, July 23, 2010 1 comment: 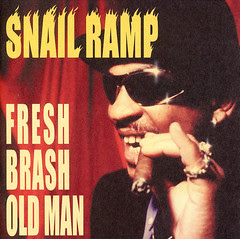 Get the whole shebang here.

Found in a suburb somewhere in Gunma Prefecture, Japan. This was in the Japanese equivalent of a Wal*Mart, in the 300-yen bin. (About three bucks.)

Founded in 1995, Snail Ramp is one of many Japanese ska bands. And when I say many, I mean many-many! There was actually a whole wall in Shibuya's Tower Records filled with nothing but Japanese ska that rivaled the rap/hip-hop section at the old Kim's Video on St. Mark's. No exaggeration. When the Japanese decide to cover a genre, they totally cover it.

And cover it well. This is a freaking great record, ersatz tho it may be. But, then, since when has authenticity or purity, especially in the realm of pop music, necessarily led to anything more than earnest forgettable crap? 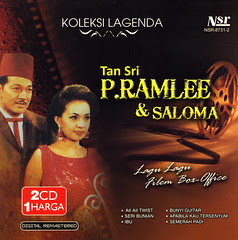 Download the first CD of this 2-CD set here.

Found in the "World Music" section at Tower Records in Shibuya, Tokyo. An import from Malaysia.

Dedicated to twist-lover Brandon Downing, who was just interviewed about his great new book, Lake Antiquity, at Bomb, and another flarf peop, Chris Funkhouser, who lived in Malaysia for--well, I'm not sure how long he lived there.