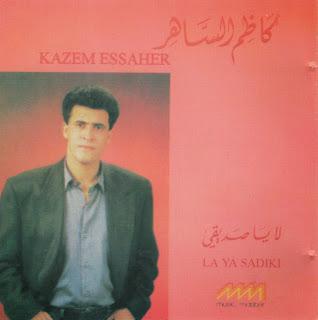 Watch a two-minute excerpt from a rare live performance of the title song:

One of the best things about moving is unpacking. Because I've just moved from a relatively large apartment to a fairly small one, I'm having to (a) unpack slowly and (b) make a lot of tough decisions about what stays and what, soon, will have to go. This has been good for me because, if I'm going to be perfectly honest with you, there are a lot of CDs here that I haven't yet really listened to. Tonight's offering is one of them. Had I listened to it earlier, I would have posted it long ago.

I don't even know how to describe this album, which consists of two songs, the 47-minute-long "La Ya Sadiki" ("Babel") and the 4-minute "Ya Rayeh Lebnan." Kazim al Saher composes a lot -- perhaps all -- of his music, and it's entirely possible these two songs are his. If so, the man is a genius. Not that I didn't already think that about him. I did. But the title song of this 1993 album is as mind-blowingly intricate as it is expressive -- and if you know al Saher's music, you know you can pretty much always count on the latter.

I've got a bit of news to share with you all, but I'm going to save it for later. Right now, a dozen-plus boxes are calling me, waiting to be unpacked, their contents sorted, their fates decided upon.
Posted by Gary at Saturday, October 26, 2013 No comments: 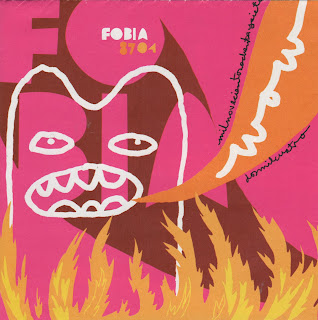 Didja miss me? Well, I certainly missed you. Yes, I DID oogie woogie oogie-oogie. *Cough*. Hello? No, wait, come back. I won't do that again; I promise.

So. I've been very busy this month: I moved. No, not to Buenos Aires or Bangkok or Tower Records Shibuya. I'm still in Astoria, but closer to Manhattan, closer to my midtown job and--most importantly--closer to the Almighty 7 Train ... or, as  I like to call it: So Big Metal Sky Snake What Takes Me To Many CDs of a Delightful "Foreign Music" Nature.

Or maybe I'm in Long Island City? Honestly, I don't know because every other map I look at has completely different borders for each Queens "city." Let me put it this way: I haven't been so excited about where I'm living since I moved to NYC in 1997.

I'm still unboxing things, which is why I haven't really added anything to the Bodega shelves since September. And also why, if you've requested a reup, I haven't yet gotten to it. (Note to Self: Next move, clearly label what's in each box.) But last weekend I took a long walk around the new neighborhood and, in addition to somehow convincing the woman working at Tacos Mexico to bring me her mother's recipe for nopales (cactus), I discovered a vast warehouse of Latin CDs, mostly from Mexico, priced to move at three for $10, including tonight's thrilling offering.

Fobia was founded in the late 1980s and were part of the Rock en Español wave, largely influenced by the American and British New Wave, including Caifanes, Los Amantes de Lola, Maldita Vecindad y los Hijos del Quinto Patio, Maná, and Neón. True to their name, Fobia's lyrics shied away from the more socio-political leanings of their counterparts, favoring exploration of band members' personal fears and unhealthy obsessions. The band recorded five albums in the 90s, split up, then regrouped in 2004. Tonight's offering includes tracks from the band's first decade along with a few songs cut the year they got back together.
Posted by Gary at Thursday, October 24, 2013 1 comment:

Throwing Egg at a Rock: Sounds from Korea vol. 1 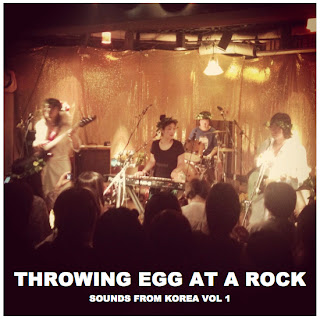 [Originally posted in November 2012.] GARY'S NOTE: For months now, a fellow traveler currently in Seoul, South Korea, calling himself "Male Cousin," has been promising to send me a mix of new and old pop, folk, rock and indie music from his host country. Last week Male Cousin sent along the finished product: 27 songs that prove to us that there's much more going on in Daehan Minguk than K-pop and PSY. His introduction follows:


Koreans love music. As one of my friend’s students explained, “We are a sing-song culture.”  There are singing rooms literally everywhere, in every city, no matter how small. Often, in Seoul, there are more than five within eyesight, and there aren’t just singing rooms. There are request bars (where you request the songs you want to hear), vinyl bars (specializing in music from the sixties through the nineties in Korean and English), even band themed bars (one of my favorite bars is called The Cure and only plays new wave music over an endless loop of Cure video projections). In Seoul, there is a bar for every taste, no matter how obscure.

Then there’s K-pop. Jesus, K-pop. Thanks to PSY (the most unlikely spokesperson for such a heavily manufactured and meticulously crafted “genre”) people in nearly every country on this planet have heard of it. It’s that incessantly catchy club music with the lyrics-you-can’t-understand-but-don’t-mind. It’s mindless. It simply works. And yes, in Korea, it is EVERYWHERE. It’s in the malls, the corner stores, the coffee shops, the boutiques, the taxicabs, it’s even piped into some of the parks. It’s entirely unavoidable.

Eventually (thank god) it just becomes background noise, you can tune in and tune out. But the ubiquitousness of K-pop is mostly a post-millennial phenomenon. There were pop stars in the 80’s and 90’s, but cut from a very different cloth. These pop stars, in addition to being in many cases actual songwriters, occupied the radio waves with the remnants of an earlier, more diverse group of Korean musicians.

See, in the late 60’s through the 80’s Korea’s music got wonderfully bent. The war was over. There was more interaction with the west and its sounds. There were Koreans and Americans playing music together, western music on the radio. And to top it off, there was a repressive military dictatorship to protest against. For a couple decades there was an explosion of raw creativity here as Korean musicians began taking cues from psychedelic rock, funk, disco, and, later, new wave. They adapted, made discoveries, and wound up with some beautiful hybrids that still deserve attention today.

However, under the military regime, a lot of this music was banned as subversive. It still existed, and was passed around fairly openly. Sang Ul Lim, for instance, is still a household name; some say they were the Korean Beatles. But as Korea modernized, so did the record companies. And in the past decade and a half, they have been  so effective at cornering the market, utilizing a by-the-numbers pop equation that always seems to hit, that they have almost completely wiped out the rich history of the previous three decades. In some sense K-pop is the true representation of music in Korea. It accounts for nearly four billion dollars of the country’s economy, and for many of my students, it is all they know or care to know.

There are some musicians here that wish that this particular part of their musical history had played out differently. The music in this mix is meant to be a sampling of the (de-facto underground) Korean music scene, as it exists at this very moment, with a handful of songs from the 60’s-90’s thrown in as reference points. There are hipster chillwavers, post-rockers, folk artists, shoegazers, weirdoes, punks, electronic experimentalists, drone metalheads, and indie poppers all making unique and wonderful music within a dominant culture that doesn’t respect difference when it comes to musical taste. They are, to use a Korean idiom, “throwing egg at a rock.” This collection is imperfect, and obviously slanted to my tastes and exposure, but nonetheless offers a glimpse at some of richness that exists here, if you just know where to look.

Male Cousin teaches at a university in South Korea. Read more about the bands in this mix on his blog here.
Posted by Gary at Sunday, October 13, 2013 8 comments: