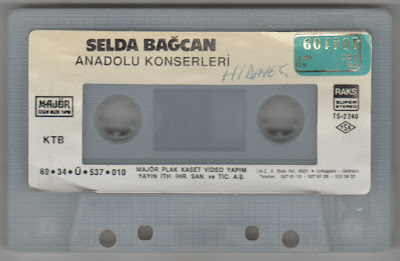 Today's cassette rip has no J-card, but I'm assuming what we have on hand is this. Published in 1991, it features two concerts, 20 years apart, by Turkish folk and rock superstar, Selda Bağcan. I found it, along with two dozen other cassettes from the 1980s and 1990s, at Uludag Video on Avenue W in Brooklyn. 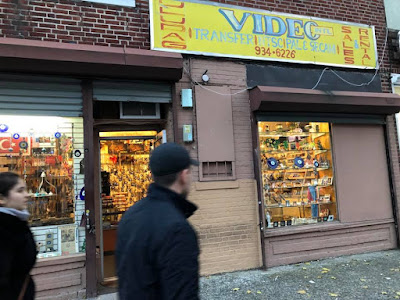 Uludag was one of my favorite places to stop by when I used to ride my bike all over south Brooklyn in the aughts; but I was told at one point that they would no longer be importing music. When I  moved further north to Queens in 2010, I just assumed they were dry, and never went back.

Technically, they probably haven't added anything new, but they seem to have put everything they may have had in storage back up on the right hand wall. 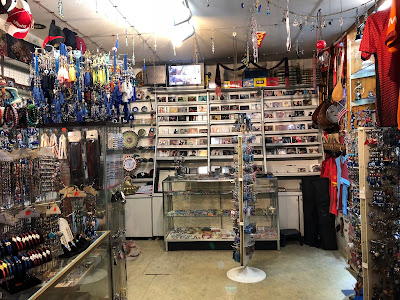 The owner, Adil, motioned me over to a bottom corner of the wall where he'd stashed about 50-75 cassettes, a third of which looked to be ca. 1980s. We talked about the history of his store as we pulled the cassettes from their hiding place and spread them out on a glass case below the CDs. 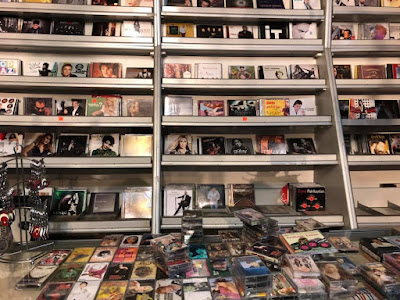 He lives in Bay Ridge, a 10-minute car ride away, and opened the place in 1985. The back wall, against which there is now a sea of blue evil eye jewelry, had at one time been all cassettes. As I set the older-looking titles off to one side, Adil took others he thought I might like and popped them in his novelty jukebox cassette player behind the register to give me a taste.

And that was when I saw the Selda cassette. "Which Selda is that?" I asked.

"Anatolian Concerts," Adil explained. I expressed my surprise: I have a number of Selda CDs, most of them bought in this very store, and had no idea that she had put out a live album. I gingerly asked if he might be willing to sell it. Gingerly, because it was right there beside the cassette player, suggesting that he had most likely listened to it recently. But without hesitation, Adil said he'd be happy to sell it to me. 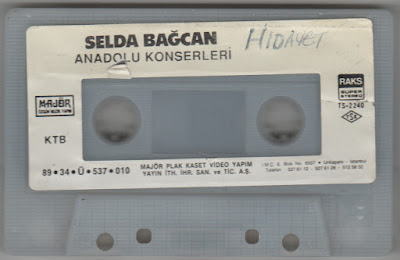 I haven't broken up the rip into distinct tracks because, while Selda performs numerous songs, there's no real break, except at the end of each side. Also, I assume you like Selda enough to just want to take in the whole thing. Right?

Expect many more posts from this haul in the weeks to come.

Listen to the show now in the archives
Posted by Gary at Wednesday, November 22, 2017 No comments: 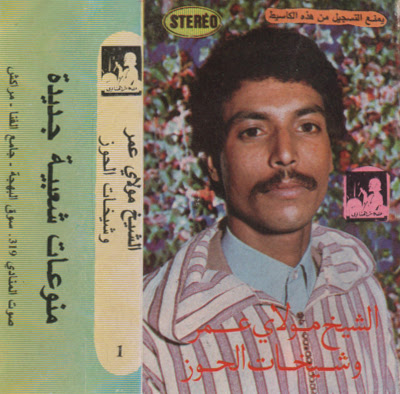 A recent find at Nassem Halal Meat & Mediterranean Grocery, an Algerian bodega in Astoria. Opened by Noudine Bahri several decades ago (I'm assuming 1980s, but not sure), the place is now managed by a Mexican-American guy who told me his name is Houssain and who began working there about 1997, the year I moved to New York.

I had no idea who the man pictured on the J-card was, but assumed Moroccan, based solely on the djellaba he's sporting over his button-down shirt. Tim and Hammer confirmed my suspicion.

As Tim wrote: "Don't recognize him, but he's certainly Moroccan. The label on the J-card and the tape shell denotes Sawt el Mounadi, an imprint out of Marrakech. Some of the most bitchin' tapes in my stash are on that label. The card reads: 'Shikh Moulay Omar and Shikhat el Haouz,' so this ought to be some fine Aita Houzia!" 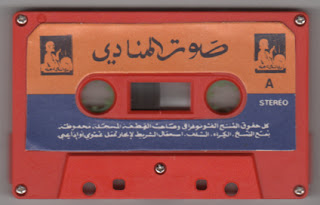 Hammer: "You got it all right, Tim. This is Moulay Omar a singer from Ahwaz Marrakesh who saw some mediocre fame in the late 70s in Morocco. The Sheikhat who sang this style in Morocco (Aita Houzia), were very few." 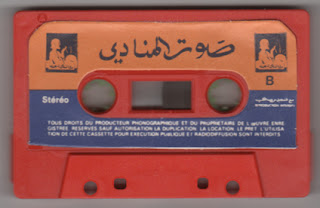 The sound quality on this cassette may not be pristine, but the energy is off the charts. Thanks to Tim and Hammer for translation and context. 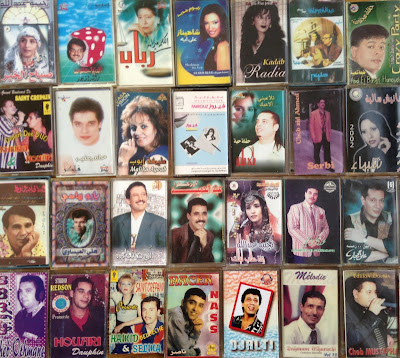 On Wednesday, November 15, Bodega Pop Live on WFMU's Give the Drummer Radio celebrated the reopening of the bodega and our first cassette series with 3 hours of killer tracks from cassette rarities from Algeria, Egypt, Japan, Lebanon, Morocco, Myanmar, Norway, Poland, Rwanda, Sudan, Syria, Tanzania, Thailand, Vietnam, and beyond

Listen to the show now in the archives
Posted by Gary at Wednesday, November 15, 2017 No comments: 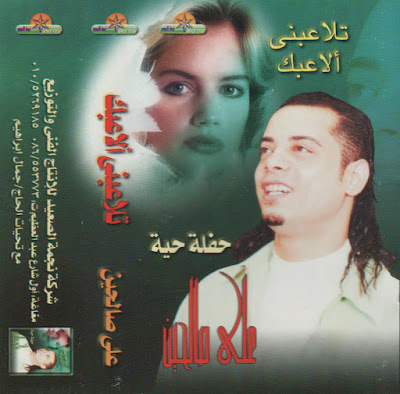 The bodega has reopened for business!

Those of you who have been following us know that, a year or so after we joined WFMU's Give the Drummer Radio, our posting of new music here slowed down until we ceased offering new rips at all. I'm not going to bore you with the reasoning; it doesn't matter. What matters is that we're back, and -- inspired by fellow travelers Tim Abdellah Fuson and Peter Doolan -- we're going to kick off our reboot with a series of newly discovered cassettes.

First up, a live recording on cassette by Ali Salhien (على صالحين), with thanks to the aforementioned Tim for translation, transliteration, and most of the context below.

According to a posthumously created Facebook memorial page, Ali Salhien (also transliterated Aly Salheen) was considered The Star of Mawwals and Star of Maghagha, an Upper Egyptian city about 120 miles south of Cairo. The page was created on March 13, 2011, presumably not long after the singer's untimely death. We've not been able to determine his birth date.

This is the sole live video of the performer I was able to find -- fair warning that the sound quality leaves much to be desired. That said, it gives you a great sense of Salhien's energy and magnetism; near the end of the video you'll see a succession of audience members, all male, leaping onto the stage to dance together.

The cassette retains all of that energy, but with superior sound quality -- considering that it's a live performance, most likely in Salhien's hometown. I've ripped it at 320kbps and separated out distinct mawwals into individual tracks. It sounds something like a grungier, less electronic version of Islam Chipsy. 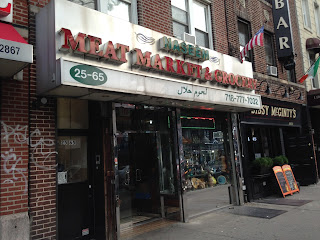 I've been visiting this particular bodega for at least 15 years. Long before I moved to the neighborhood, I made frequent trips up here from Brooklyn, visiting Nassem, the Nile Deli across the street, and a no longer extant Lebanese market run by a poet who seemed to have a story about at least one song on every single CD that I bought. 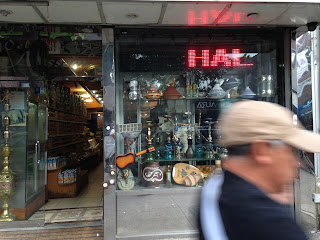 Astoria is home to more than 75,000 residents; the population of this single neighborhood dwarfs that of the approximately 15,000 Algerian Americans spread across Chicago, Dallas, Houston, Miami, and New York City. Yet, there are somehow enough in the area to support Nassem, which up until 2010 sold hundreds of original CDs and cassettes. (Most of my Algerian CDs -- my entire Cheb Hasni collection, for instance -- were bought at Nassem in the aughts.) 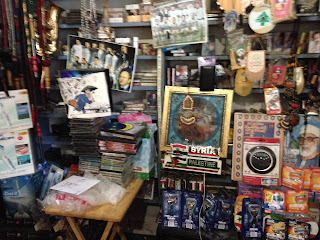 The few CDs that remain are pirated copies with paper labels that you risk destroying your player or DVD drive playing, let alone taking the time to rip. Last year, when Peter Doolan came to visit, we took a tour of the neighborhood, stopping by the bodega, where each of us picked up a couple of cassettes. 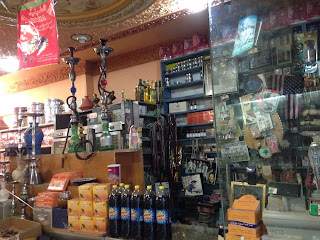 I went back last week and, after talking briefly with the Latino guy who has managed the butchery there since 1996, convinced him to pull out all of the remaining tapes for me. There were about 40 titles left. Spoiler alert: I bought them all.

As I make my way through these Algerian, Egyptian, Lebanese, Moroccan, and Syrian rarities -- some of which have been sitting on Nassem's shelves since the late 1980s -- I'll be posting those of special sonic interest here. Expect a new one once a week or so for the foreseeable future. If you know anything about the music (or at the very least, the language) I strongly encourage you to share your insights in the comments or by email.

This Wednesday's Bodega Pop Live show, by the way, will be focused on cassettes from around the world.

Link to Ali Salhien's تلاعبنى الاعبك in the comments.
Posted by Gary at Sunday, November 12, 2017 10 comments: 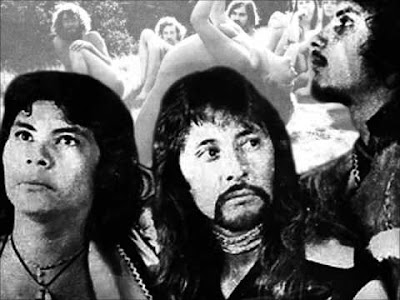