Is Psychedelic Man performing a genre? A period-style? A sensibility or feeling? Or does he simply represent a state of being? Find out tonight from 7-10 PM EDT on Bodega Pop on WFMU's Give the Drummer Radio
Listen to the show (starts 7 PM EDT)
Posted by Gary at Wednesday, October 13, 2021 No comments:

It's a Small World (Millie Small)

Tonight on WFMU's Give the Drummer: Psychic emanations from Benin City to Ramallah. Who's Zoomin' Who?
Listen to the show (starts 7pm EDT)
Posted by Gary at Wednesday, September 22, 2021 No comments:

Tonight on WFMU's Give the Drummer Radio, we share sonic emanations from Afghanistan to the banlieue. Feelings without name.
Bookmark the page and see you at 7:00 PM EDT
Posted by Gary at Wednesday, September 15, 2021 No comments: 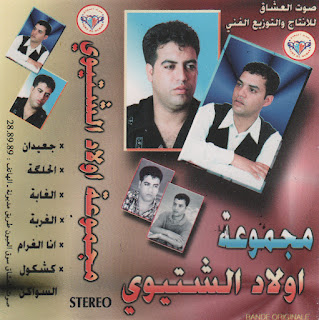 This morning's offering is what Moroccan Tape Stash's Tim Abdellah (HAPPY BIRTHDAY, TIM!!!) describes as "cassette-era chaabi, heavy on the aita." I found this, along with dozens of other cassettes I have yet to share, at Naseem Meat Market & Grocery on Steinway Street here in beautiful Astoria. The store has long since closed and reopened under new ownership with a new name, but I owe a quarter to a third of my cassette collection to that place, a goldmine back in the day.
Not wanting to bother the aforementioned Tim, I made an attempt to identify, transliterate, and (when possible) translate all of the tracks using Google translate, but it was ultimately a mystery as the number of titles on the cover didn't seem to correspond to what I was seeing and hearing in Audacity. 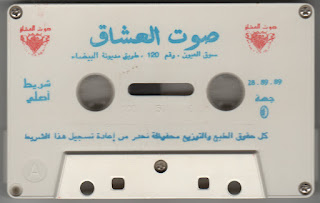 I gave in and sent the files to Tim, who realized that part of the problem is that the track order appears to be flipped. I've updated them in the metadata and now offer the FLAC files to you, dear visitor, for your listening pleasure. 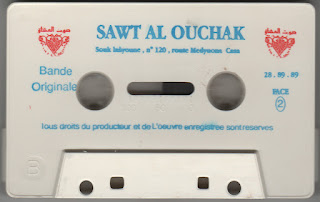 Here is Tim's corrected transliteration/translation/order and notes on tracks 2-5:

Groupe Ouled Chtiwi مجموعة اولاد الشتيوي
Sawt al Ochak cassette صوط العشاق
1) Al Ghorba (Alienation) الغربة
2) Ana Lghram (Me and Lovesickness) انا الغرام
3) Kachkoul Aswaken (Medley: The Residents)  كشكول السواكن
4) Jaaidan - Al Halga - Al Ghaba (جعيدان -الحلگة - الغابة)
5) (Taarida)
--
Track 2: Your translation of "Ana Lghram" is correct for title as written. But listening to the vocals he says "ana w lghram, ma3andi tbib ana", which means something like "me and lovesickness, i have no doctor, me". So I would go with "Me and Lovesickness" for the translation.
Track 3: I didn't know the term "kachkoul" before, which Google translates as "notebook" or "patchwork". But looking around on YouTube, I get the idea that in a musical context it means something like a medley. The track is definitely related to Swaken - it's a term used in Aita that means "residents", in the sense of those possessor spirits whose residence in bodies manifests during trance.
Track 4: The terms Jaaidan and Halga are new to me. They appear to be Aita pieces, and I found different versions of them on YouTube that sound like parts of this long medley. I do know Al Ghaba (the forest), which is a well-known chaabi/aita song but I don't hear it in Track 4 or Track 5.
Track 5: This seems like just a filler instrumental to run out the tape. I usually label these "Taarida", which is a term used for formulaic musical instrumentals, and it literally means "making wider", or "stretching out". So I used that here for Track 5 title.

It's a terrific ride. As often is the case, massive thanks to Tim! Link in the comments.
Posted by Gary at Sunday, September 05, 2021 1 comment:

On tonight's show, we'll share a diversity of sounds found in disparate Chinatowns, from New York City to Bangkok.
Bookmark the page and see you at 7:00 PM!

Posted by Gary at Wednesday, September 01, 2021 No comments: 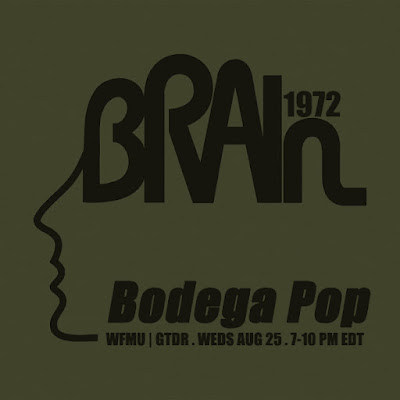 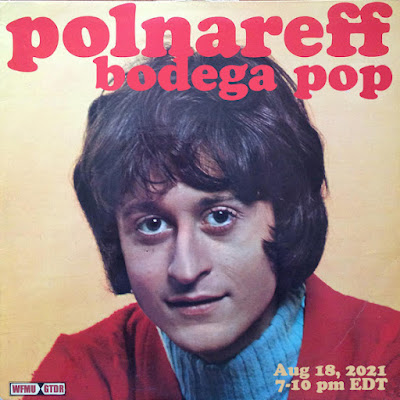 Inspired by a recent article by Richard Metzger, we take a deep dive into Michel Polarneff's work and influence. HT to Tim Abdellah for pointing us to the article.
Listen to the show and join the conversation (starts at 7:00 PM EDT)
Posted by Gary at Wednesday, August 18, 2021 No comments: 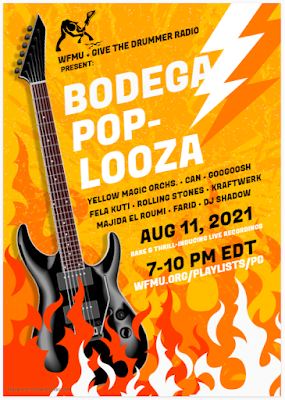 TONIGHT on WFMU'S Give the Drummer Radio, Bodega Pop spins rare and thrill-inducing live tracks from Egypt, Germany, Iran, Japan, Lebanon, Nigeria, Pakistan, Puerto Rico, Sudan, Syria, the UK, and USA.
Everyone here is vaxxed up and the porta-potties are definitely on their way, so grab another chilidog and brew!
Bookmark the page and see you at 7:00 pm!
Posted by Gary at Wednesday, August 11, 2021 No comments: