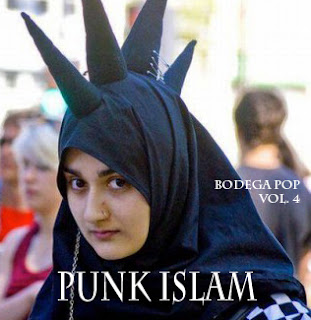 One of the all-time most popular Bodega Pop DLs, reupped a second time here.

I haven't been so excited about music coming (mostly) out of the USA in a long, long time. The bands in this 14-song compilation share at least two things: they're punk and--whether practicing or lapsed, straight or queer, sober or stoned--Muslim. They're also writing some of the funniest, most outrageous and, without question, politically savviest lyrics in English (and Urdu and Punjabi) since The Clash.


Musically, they're all over the map, drawing from 70s punk, 80s rap, ska, rock, bhangra, Bollywood, metal, noise, folk, disco, etc.--the sum total of which almost convinces me this might be the missing LP between London Calling and Sandinista!.

I put this compilation together after watching Omar Majeed's documentary, Taqwacore: The Birth of Punk Islam, which I highly recommend. The moment the DVD ended, I started hunting around online for songs, the result of which, pared down to this blogger's personal favorites, you can now listen to yourself.
Posted by Gary at Tuesday, December 09, 2014

I have no idea how much of this I will actually like, but as someone old enough to have heard both Sandinista and London Calling when they were new, I am incredibly happy that kids today are making music of this sort.

Thank you for taking the time to put this comp together: somewhere Joe Strummer is tuning up, remembering that 'only band that matters' tosh, and smiling.

Thanks again, your blog is great!

much better than the CLASH -
they mostly sucked.

very nice! you do a great blog.

I don't anything about this post, but I've lived in vietnam quite a long time and travelled to Cambodia where I bought many 60-70's cambodian pop, so I really appreciate your posts about cambodia and vietnam.

i know what you mean about the lack of excitement... funny, given the times. this looks like fun and enlightenment all in one click!
thanks for the chance to hear it, and al the work in bringing a blog like this together...
d

I Reeeeeeeally need this! Can you fix the link?

Hey Nick, I just checked the link and it appears to be fine. Try again?