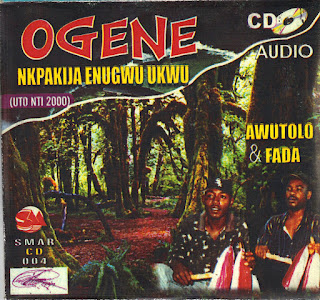 Reupped by popular demand, here. [Apologies for no longer hosting a sample; but trust me, you'll enjoy it.]

Unlike yesterday's post, this morning's features what I can only assume to be Nigerian folk music. The sample track above opens with what sounds like a homemade brass instrument of some kind, not uncommon in Nigerian folk, and Awutolo and Fada laying down a terrific, complex rhythm while singing at times in a kind of call-and-response and at times in unison. The total effect is of an intricate soundscape that snaps, pops, buzzes and honks far enough above the level of ambient to keep the listener's ear keen, while never swerving into catchy hook or melody.

I found this sublime recording, along with yesterday's offering and a few other things, at Blessing Udeagu (99-08 Lewis Avenue, Corona, Queens). Perhaps it's just a coincidence, but after I posted yesterday morning's--the first western African recording to appear on this blog--my traffic shot up to rather insane levels. I typically have about 600 visits in a 24-hour period; this morning, at not quite 6:30 a.m., I already have nearly 1,200, and the day still has about 17 hours left to go.

So, uh ... you like the western African music, yeah?

In other news, I'll be reading tomorrow night (Thursday) at 6:30 at RH Gallery with Catherine Taylor and Sandra Liu at this event, which is in part a celebration for the publication of Ernst Herbeck's Everyone Has a Mouth, which I translated from the original German (some poems in collaboration with Oya Attaman and Ekkehard Knoerer). While the book has not yet been officially released (they're still hand-stitching the covers), I'm told there will be about 50-60 copies there the night of the celebration.

And, finally, I reserved bodegapop.com, which I've currently set to redirect to this blog. Ultimately, I'll be creating something that I think is sorely lacking: a portal to music blogs and other sources of information about and samples of international musics. It seems insane that no one has yet put something like this together. Write to me if you'd like in some way to be involved at: bodegapop@gmail.com.
Posted by Gary at Sunday, May 12, 2013

Love this, Gary! And have fun tomorrow night!

A kind thanks for this traditional Igbo music!!!