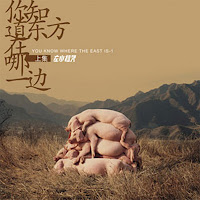 There is no equivalent to Zuoxiao Zuzhou in any culture I can think of. In addition to having launched one of China's most notorious rock bands of the 90s, No, Zuoxiao Zuzhou is a successful visual artist, poet, novelist, and film score composer. (His CDs, which are often self-released, typically include his own artwork on the cover--those are his pigs, to the right.)

If the U.S. were a bit less culturally provincial he'd be nearly as well-known here as Ai Weiwei; as it is, he's probably best known in the States, if at all, for having contributed vocals to the Cowboy Junkies' "A Walk in the Park." 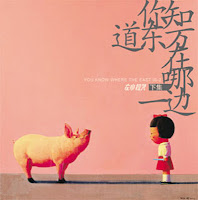 His music is all over the place, as is his voice, which at times seems to evoke Nick Cave, Leonard Cohen or even Tom Waits, and at other times--especially on this album--Pere Ubu's David Thomas. His music defies description, having a foot in traditional Chinese music as well as the more experimental strains of American and British post-punk.

You Know Where The East Is is considered by more than a few critics in China to be one of the--perhaps even the one--greatest rock album(s) to have ever been recorded in the People's Republic. It's not something I'm inclined to argue with.

Check out 方法论 from this album:


This ("Money Song") is worth watching as well, though it's from a different album (which I'll upload soon):

This is truly interesting. We need to meet up and find some selections I can put into my regular DJ rotation.

Just making my way back to this post, and I'm really glad I returned. You're a marvel, Gary :-)

iTunes wouldn't cooperate with me and put the songs in correct order, so I got the track sequences here: http://www.zuoxiaozuzhou.com/EnCP.aspx

His song titles are often hilarious; anybody want to take a stab at them?