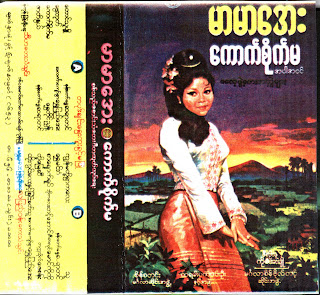 Listen to "Taung Thu Pyao"--which catapults itself from jaw-dropping classical Burmese piano and vocal to, four-and-a-half minutes later, upsettingly awesome funk groove--and learn everything you need to know about this supremely mind-blowing Burmese cassette from 1980.

Born in 1942 to a family of artists, Mar Mar Aye began music training at a very young age, recording her first hit record “Thet Tan Paw Hmar Kasar-mae” when she was 13 years old. Over the next four decades she recorded thousands of songs, acted in a couple of films, wrote a couple of novels, and became a member of Burma’s National Music Council. She is probably the most famous Burmese traditional singer.

A politically active artist who has written songs in support of the Saffron Revolution and advising citizens to “Vote No!” in a national referendum on a new planned military-backed constitution, Aye left the country for the U.S. in 1998 and has lived here ever since.

FYI, Divshare is misbehaving. Earlier today the download rate was so slow that it would have take 6 hours to grab this file. Right now, it's an hour.

I'm sure they'll fix their problem eventually. All in all, I prefer to Divshare to everything but Mediafire.

Yeah, I noticed too that the sound files Divshare was storing weren't playing either (thus the sudden move to Soundcloud for this post).

It appears to be okay now; although I must say, Divshare has been having a lot of problems recently, which concerns me.

I would switch to Mediafire, but I find Divshare has more to offer me and I've never ever lost a file there (as I have on Mediafire).

Also, Divshare is relatively under the radar--Filetram, for instance, doesn't seem to spider for it.

thanks so much, this is great! is this a thiri video find? thanks also for the info about her!

Alas, it's not from Thiri. I do have Mar Mar Aye and several others on order from them (see this morning's post), and once I get them, I'll of course upload.

Are you going to upload yours? I suppose it could go beyond the Thai theme of your blog. If not, would you like to do a guest post here with it?

The cover image and song files for this came through a series of links on a Burmese YouTube channel. It wasn't all in one place, although this is all the songs on that tape. So, I put them all together here. If you click on the videos on this page, that's the YouTube channel where I found the links ... but I wasn't able to find links to anything else.

Thank you for this - astonishingly good.
Looking forward to hearing your upcoming Burmese motherlode :-)