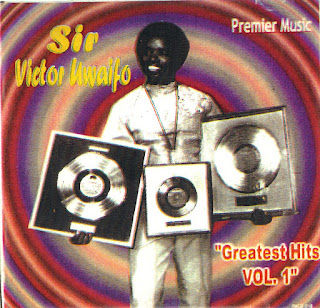 Listen to "Guitar Boy"
Get it all here.
My God, but I love Queens. Have I expressed my undying love for this borough before? As far as I'm concerned, it's the greatest city in America.
As I've hinted in the last week or so, I've been waiting for My Burmese Ship to Come In--specifically, Zaw at Thiri Video has been culling his archives for a number of CDs he says he has of older, more traditional Burmese music, which he promised to have ready for me last weekend. Well, on the appointed day I made the trip to Elmhurst ... only to find that, in fact, the CDs weren't ready for me.
But in Queens, when one door shuts, other doors open. As I wandered around the eastern edges of Elmhurst, suddenly realizing I was lost, I scooted under an awning to check the GPS on my phone. When I looked up, on another awning, two or three doors down, I saw the words "African Movies." What? Oh, my.
Blessing Udeagu (99-08 Lewis Avenue) is ostensibly a copy shop, with several photocopy machines, that also happens to be a used bookstore (there were dozens of old, dog-eared books fading in the storefront windows), a Nigerian DVD store (a whole wall of them, in fact) AND an outlet for African music, mostly from Nigeria and Ghana.
I asked the shop keep if it might be okay if I looked through the CDs. "They're African," she warned me. I nodded my head and proceeded to dig through what they had. After determining that each CD was $5, I chose a few that looked most promising and brought them up to the register. "These are in African," she reminded me. I gave her a Readers Digest version of my Ye Olde "I Happen to Like Music From All Over the World" assurance, which didn't, frankly, seem to assuage her concern that I might be buying the wrong music. With a pitying look, she put the handful of CDs I'd plucked out into a plastic bag and, shaking her head, took the money from my now visibly shaking hands.
"Sir" Victor Uwaifo is the legendary inventor of Joromi, which to my ears sounds like Highlife, which tells you just how little I know about Nigerian music. Uwaifo started recording in the 1960s and became famous for playing his guitar, live, with his tongue and feet in addition to his rather impressively dexterous fingers.
I'm supposed to check back in with Zaw next weekend; if I do, and if My Ship has come in, I'll be posting an awful lot of Burmese music in the next few weeks. Until then, if you like Nigerian music, you might want to check back here a few times in the coming days.