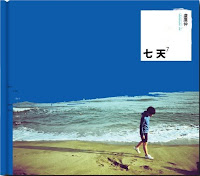 When your comments field gets overrun by bitter expatriate trolls wasting away in the middle east and your stat counter reveals that visitors are coming to your blog via Google searches for “i used megaupload” + “prison,” it’s a sure sign that it’s long past time to get back to the music.

My hope this evening was to upload the entire discography of my all-time favorite Taiwanese pop star, Crowd Lu. But, considering the fact that I’ve got a day job to get to early tomorrow morning, that’s not very likely to happen. Instead, I’ve uploaded CL’s second full-length album, Seven Days; you can get his first album, from 2008, 100 Ways to Live, here.

Crowd Lu is the closest thing pop music has ever had to a superhero. After having been seriously injured as a college student when a truck ran over his legs, Lu spent his recovery time learning to play guitar and writing songs. Not just any songs. Really incredibly fabulous pop songs, at the level of Jonathan Richman or Nick Lowe.

The year before he released 100 Ways to Live and became one of Taiwan's most popular singer-songwriters, he became a YouTube sensation for this video, where he imitates Russian operatic singer Vitas:


That humor and exuberance can be felt on every EP and full-length album Lu has released over the last four years or so he's been active. I found this CD--indeed, everything of Crowd Lu's that I have--at P-Tunes and Video, the little shop on Chrystie Street featured in this blog's header image.
Listen to "Oh Yeah!!!"
Get it all in glorious 256kbps here.

And let me know what you think. If you like him, and like him lots, I'll likely upload the rest of my collection.
Posted by Gary at Sunday, January 29, 2012