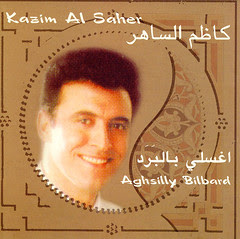 Listen to the the whole thing
Get the whole CD here.
[Another of my "house-cleaning" reposts; the first time I posted this it was at 128kbps and you had to download each song individually. Here it is now in 192 & a single zip file. It's one of the most sonically rich albums I've posted to date and I can't recommend it highly enough. I think it's Al Saher's all-time greatest album.]
I found this CD many, many years ago at Princess Music on Fifth Avenue in Bay Ridge. The last time I stopped by Princess Music their doors were closed. I've since called the number on the awning a number of times and always get nothing. They were the last of some half a dozen Arabic music places in the area that I used to haunt; now, it looks like they're gone with the others.
Kazim Al Saher, born in 1957 in Iraq, is perhaps the Arabic world's biggest living superstar. I have maybe a dozen of his CDs, most of which are heavily Western influenced. "Aghsilly Bilbard" is an exception.
Unlike many Arabic singers, Kazim Al Saher composes most of his own music. I don't think there is any question that the man is a genius. But more importantly, every time I listen to "Waneen," the first track (of only three) on this CD, I get terribly misty-eyed. I think it's one of the most moving pop songs--if it can actually be called a "pop" song--ever recorded.
While you're waiting for this thing to download, read this interview.
Posted by Gary at Thursday, January 12, 2012