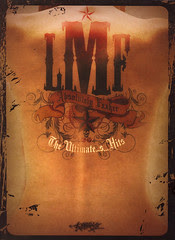 Listen to 10 songs from this 3-CD album
Get it all here.
Visiting my favorite Video/CD store in Brooklyn's Chinatown last year I noticed an odd-looking VCD I'd never seen before: "Dare Ya!" which was described as "A daring documentary on the Hong Kong's most controversial hip-hop band, LMF (LazyMuthaFuckaz)." I noted the "Category III" triangle in the bottom right hand corner. ("Category III" = X, or adults-only, rating.) I assumed it was going to be either really awesome, extremely embarrassingly bad, or some sort of parody, a la Daniel Wu's Heavenly Kings.
It turned out to be fairly good. (You can watch the entire documentary, with English subtitles, below.) But nowhere near as life-changingly awesome as the 3-CD "best of" compilation I discovered a week later in a Manhattan Video/CD place on the corner of Bowery & Canal. 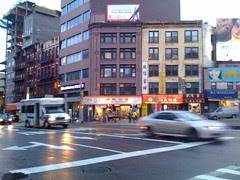 This is surprisingly good! Thank you.

Glad you liked it, Holly! LMF is definitely among my all-time favorites.

And happy new year to you, too!