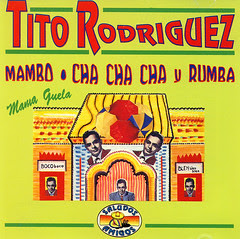 Get it all here.
My first job in New York, summer of 1997, was secretary to the head of the history department at Columbia University. It was an easy gig. The pay was negligible. Our union went on strike about a month after I took the job, making my first months here a living financial hell.
But I got a lot done. A year and a half into the job, I started Readme, one of the first large-scale online magazines of poetics. (It was mostly interviews and essays; I wasn't yet convinced that the Web was such a great place to publish poetry.)
And, at some point while I was there, I remember walking along Amsterdam Avenue above 110th Street and seeing a single line of CDs over the head of a cashier in a tiny bodega with a single aisle. I went in. I saw the cover above, asked how much it was--I think $7 or $8--and bought it.
Tito Rodriguez was one of the most popular Puerto Rican bandleaders of all time. (That said, his father was Dominican, his mother Cuban, and he did most of his recording here in New York City.) I had no idea who he was at the time, but when I popped this thing into my ghetto blaster at home, I was determined to find out. Sadly, the music in this collection--recorded in NYC from 1949-51--may well be the best material he ever recorded. Certainly it is the tightest I've heard by him and, believe me, I've picked up everything else I've managed to find.
More than a decade after finding it, it remains my all-time favorite Latin music CD.
Posted by Gary at Wednesday, January 04, 2012