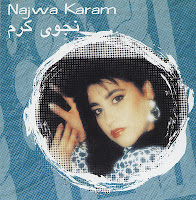 At the age of 23, Najwa Karam, born in 1966 in Zahle, Lebanon, a largely Christian city in the mountain region bordering Syria, released this, her first studio album. While popular in Lebanon, it didn't make much of a dent in the rest of the Arabic world. It would be another three years before she released her second album and another five before she would sign with Rotana and become a pan-Arab superstar.
Her career was not exactly smooth sailing. She was plagued by a series of scandals, including eloping at 4:00 a.m. one night with Yosef Harb, a Muslim music promoter living in Canada, who was several years her junior, and--much worse--being accused in Alkefah Al-Arabi of having told a television interviewer that she had named a pet dog after the prophet Mohammed.
After the article appeared, Karam filed a lawsuit, and assumed--as she didn't even own a pet--the matter would quickly be forgotten.
By early 1999, however, morally incensed busybodies were frantically faxing the story to magazines and radio stations throughout the Arabic world. According to a report in a March 1999 issue of Al-Ahram Weekly, Riyad Daoud, a former member of the Jordanian parliament, publicly called for Karam's death. She was banned from entering Jordan and Qatar. She ultimately cleared her name and is now one of the most popular singers in the Arab world.
While I love all of her albums (I've found all but her third, which was released on an obscure, probably now-defunct label), this one holds a special place in my heart, in great part, for the completely hair-raising final mawwal, "Baladeeat," a track I've forcibly played to every single person unfortunate enough to have stepped a foot or two into my apartment.

I'm dedicating this upload, which I've ripped using the Apple Lossless code, making each song a whopping 1,000 kbps or more, in memory of the poet Stacy Doris, who passed away two nights ago. She was a friend of just about every non-mainstream poet in America and one of the warmest people I've ever met. I made her at least a couple of mix-tapes over the years and I remember she was particularly fond of Karam, and especially "Baladeeat."
Listen to "Baladeeat"


Get it all here.
Watch Najwa belt out a couple of other mawwals a few years prior to releasing this album:
Posted by Gary at Thursday, February 02, 2012

Gary, really appreciate being able to sample the sounds via the divShare links! Thank you. Dave

Gary, those you rube clips are especially fine! Love Najwa's voice in the first, and the audience participation in the 2nd - which I've just watched twice ;-)

DEAR Gary Thank you Thank you Thank you for introducing me to Najwa, I am looking for all her albums now. What a beautiful compelling voice! I love pop/trad with real drums & percussion. If you haven't yet - you might like to check out Karim Ziad - an algerian percussionist++ whose work is another recent revelation to me. Thanks again so much for sharing your finds.

I will definitely keep my eyes out for Karim Ziad ... if I find anything, you'll know about it here!

Hi will be greatly appreciate if u could reup this amazing piece of music.....I lost my file of this a year ago :(

Thank you for your consideration and your amazing work