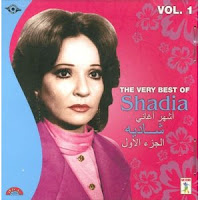 Egyptian actress/singer Shadia, born Fatima Ahmad Kamal, acted and sang for more than 100 films before retiring in 1985. Though I've known of her for a long time, I've only ever managed to find a couple of later CDs, neither of which was (to my ears) particularly compelling. That is, until last week, when I found this two-volume set at the Nile Deli on Steinway Street in Astoria, Queens, about a 15-minute walk from my apartment. 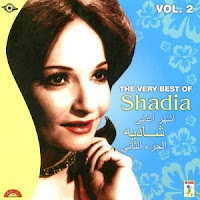 The range included in these two volumes is impressive, beginning with the rather western-inflected "Khamsah Fe Setah" (listen to sample below), to more-or-less traditional sounding Arabic pop and classical. Though she has been recommended to me more than once by various bodega owners in Queens and Brooklyn, there is very little written about her in English, either online or in the two books on Egyptian cinema that I have, which seems odd, considering how long her career lasted--well into the 1980s. (She's still alive and living in Egypt and is, depending on which of the given birthdates I've found is correct, either 80 or 82 years old.)
Get both CDs in a single zip file here.