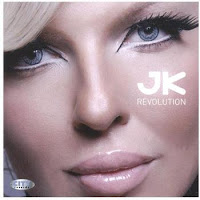 Serbian turbo folk star, fashion designer and former columnist Jelena Karleuša, or JK, is the Lady Gaga of the Balkan Peninsula--but with much better music. Hugely popular especially among the gay population, she won 2010 Gay Icon and LGBT Person of the Year Awards from the GayEcho Annual Gay Icon Awards and the Loud & Queer Annual Awards, respectively. Her music video for "Tihi Ubica" ("Silent Killer," included on this CD) was the most expensive ever made in the Balkans.

I found this completely delightful CD, having never before heard of the woman, about three hours ago in a corner of the locally famous Euro Market on 31st Street in Astoria. Twice as expensive as the smoked pork loin I also picked up, JK Revolution is proving to be more than twice as satisfying.