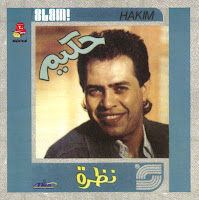 From an interview with Hakim earlier this year:

B.E.: So, you made the first album [Nazra]. You wanted to make something new with sha'bi music. What was new in the very beginning, in that first record?

B.E.: ... You added those things ... And what happened after it was released?

Hakim: I don't know. The rain has come. In three days. Number one in the Middle East. Like a bird flu! Really. Really. Like bird flu. [LAUGHS]

This, Hakim's first album, changed Egyptian pop music forever. What's incredible is that, as great as Hakim has been over the years--and he's pretty obviously one of the true greats of pop music--this album (which I just played for the first time, finally having found it at the Nile Deli on Steinway Street this evening, after years of searching) still rocks as hard as it must have rocked back in 1992 when it was first released.