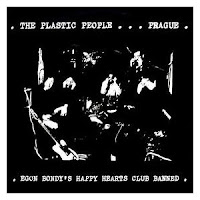 R.I.P. Vaclav Havel. In memory of the great Czech dissident writer/president, here's Prague-based Plastic People of the Universe's first studio album, recorded in the early 70s and finally released in 1978 in France (they were banned in the former Czechoslovakia until the Velvet Revolution of 1989). Heavily influenced by Frank Zappa (from whose song "Plastic People" they took their name) and the Velvet Underground, the PPU put the Prague in Prog Rock. Sorry. Seriously, if you're a psych music junkie you probably already have this or, if not, are perhaps peeing your pants as you realize that--finally!--here it is; you've found it.


Listen to "Podivuhodny Mandarin"
Posted by Gary at Sunday, December 18, 2011