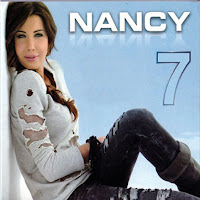 Get it here.
This jaw-droppingly great CD was released on September 6, 2010, the day I moved into my new digs here in Astoria, and I'm almost certain I picked it up on Steinway Street that month, or possibly that October. It's without question the most forward-looking Arabic pop album of the last decade or so and manages to be so without resorting to gimmicky crap like the digi-voice thing that every other Arabic pop star seemed to rely on over the last several years. 7 received a Murex D'or Award, the Lebanese equivalent to the Grammies, for Best Album in 2011.The video for "Fi Hagat," the 7th song on 7, has been viewed more than 22 million times, which gives you some idea of her popularity in the middle east. (Watch it here.) It's my least favorite song on the CD (I much prefer the song you can listen to below), but I'm obviously in the minority on that one.
Listen to "Lessa Gayya A'ollo"
Posted by Gary at Wednesday, December 07, 2011