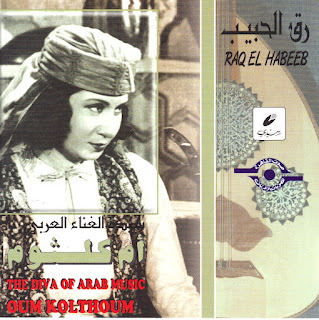 Note: Please take the survey to your right if you haven't already.

Virginia Danielson, in her scholarly book The Voice of Egypt, cites "Raq el Habeeb" (or, her transliteration, "Raqq il-Habiib") as an example of Kalthoum's use of varying qafalaat, or cadences that served as endings for lines, phrases or sections, for maximum dramatic effect.

It's true: This is a particularly dramatic performance; there's a section near the end when Kalthoum really lays into one repetitive passage that is one of my all-time favorite moments in all of recorded music.

I picked this up, along with most of my Oum Kalthoum collection, at the Nile Deli on Steinway Street.

Can't wait to listen to the song? Check out this video, which also has a lot of really great photos:

Oh, this piece! Raq Il-Habib: My Beloved Has Mellowed. My! Oh my!

Allow me, Gary, as I shall expound more on the historism and musicology behind this amazing Umm Kalthoum 'monologue' number.

Introduction:
First, this was her last (and longest...) piece that she had with Mohammed Al-Qasabghi (محمد القصبجي, nicknamed by many as simply 'Qasab' which means the Thin Reed: He was a very skinny old man who held his huge lute as sitting right behind the 'Sett' (The Lady), while she belted her words until her voice grew raveling and grovelling). Secondly, the music of this piece was very different from Umm Kalthoum's strict classicism of the earlier compositions of Zakariyah Ahmad and Riyadh A-Sunbathi. Last, this is one of her most dramatic and musically-rich songs that she sang in her prolific musical career.

The Musicology:
The gist of this composition, is that Qasabghi wanted to embroider in this piece his entire musical genius and every style known used in the Arabic tarab classics. The piece is composed using the Nahawand Maqam (an 'anything-goes' 'foreign' maqam), and starts with a short, monotonal introduction characterised by a free-form 'ad-lib' section (so-called by Egyptian musicians as 'Le Chromatique' for its varying colourfulness), dipping right into some rhythm that sounds like samba but of a quintuple measurement played using Qasabghi's oud... back to the ad-lib section, until Umm Kalthoum begins to sing.

Then, the maqam changes into that of Bayati; a strictly Arabic one unlike Nahawand which sees her repeating a lot of her lines over and over again. Off and on again, this Arabic maqam sees a lot of interventions by other fellow sound-alike maqamat like the Rast (on the fourth degree or what enthusiasts call 'Rast Jahar', or Rast Jahar-ka), which can be very handy during her "Aaahhh"-ing that is present throughout the piece.

After that, comes the Hijaz maqam which is a safe retreat or a musical 'backloop' done on the part of Qasabghi to get back to the Nahawand in order for the listener not to feel any cacophony during the transition (called in Arabic Nashaz). Thus, begins some cello work and again the change goes on with yet another maqam (Maqam Kurd) sung by Umm Kalthoum at the same note of that of the previous Nahwand one and sometimes intersected by a Bayati maqam which was almost miraculous how Qasab was able to combine two differing maqamat at the same song line/s!

Not just that, it is said that this piece was composed on the Zikrayat piece (note: both share the same maqam by the way), but Qasabghi convinced Umm Kalthoum to take that song into a newer dimension making it a whole new song, entirely.

Bayati and Hijaz are also combined at the middle of the piece in a meld maqam that few musicians do use called Al-Shura. On and on... This piece is so full of changes in maqamizations and the tunality of her voice is so marvelous that the listener is unsure how would the whole piece end which keeps us in total immersion of the sound.

The Historism:
Qasabghi went to only 'perform' behind the Lady after he refused to stop composing for another Egyptian classic female singer; namely, Asmahan (She was jealous of him composing for her according to Dr. Rateebah Hafni who wrote his biography, while some argue it was because the failure of one of her film's recordings that got her really angry at him). But, Asmhan died soon afterwards and with her died the stiff competition between the two ladies of Tarab, which caused him to come back asking to compose for Umm Kalthoum again, but she never acceded. This very last number was emblematic because in it, she withdrew right from any competition between herself and Asmahan or any other female Egyptian singer. Sadly, there was not another tune done by this marvelous musical genius duo again. They barely spoke in public until at latter days when Qasabghi was ill and nearing death in the mid-60's.

There are five famous known live recordings of Raq Il Habib: the very first known dates back to September, 18th, 1941 during a hafla at Iwarat Memorial Hall; lasting a staggering 59 minutes. What's impeccably unbelievable was how the second hafla took her 52 minutes to finish, sang two weeks after the first one.
Then came Raq Il Habib/Ya Leilt El-Eid in September, 17th, 1944 recorded at Al-Ahli Club, Cairo (during which King Farouq of Egypt endowed on her a decoration of the Third Distinction called 'Wisam Al-Kamal'), all the way till Januray, the 3rd, 1952 and then April, the 1st in 1954 (Raq Il Habib/Ya Zalamni) both recorded at Al-Azbaiyah Gardens, Cairo. The last recording was held at the same venue that started it all in May, the 3rd, 1956.

The total number of her renditions of this eponymous piece are said to total 35 haflas (second only to Sahran Liwahdi: 'Alone In The Night' which scored the top-spot of 38 haflas). Live recordings that are assimilable from all these haflas are 21 (four of which are in a very bad shape), lost now in some dusty vaults at various Arab radio archives, some were sung with audience and some were not (solo with the band a few select guests).

Addendum:
Here's a cassette at Tapesss blog that has a cassette rip of 320 for those who want to listen to a better sound-quality instead of quantity .

As do for me, Gary...
Allow me to post another file or two of these beautiful and rare recordings that I have for Raq Il Habib here on the comment box. I shall upload them soon.

This is a magical Umm Kalthoum week, I guess. Pretty much reminds me of your Cheb Khaled one, but sad as it is, I can't have a post for Umm Kalthoum anytime soon: To write such a giant one post is to do her injustice, really. And if I wanted to do this daunting feat, trust me... I need an entire year to finish it.

Recordings:
1- Tapesss' own cassette ripped by JamesL at his blog (320 kips) which the last comment didn't show because of some HTML en-tag-lment:
http://tapesss.blogspot.com/2012/02/umm-kulthum-rak-el-habib.html


Last, and after this lengthyass commentary on my side... Here's a rare picture of Umm Kalthoum with Qasabghi (standing, leaning on the sofa with his infamous, Hitleresque 'tache), circa 1950s:
http://i1147.photobucket.com/albums/o560/HythamHammer/UmmKalthoum.jpg

This was just marvelous. Thank you, Gary for allowing me to clutter your comment-box with my enthusiasm.

No problem; and thank *you*, Hammer, for all of this fabulous detail--it's greatly appreciated!

Ahhhh it's so nice to run into people that appreciate Oum Kolthoum like this. I keep hoping for more english language information about her and also Abdel Halim. Thanks for the different versions, much appreciated.

Yes, it was.
Gary's to be thanked here: I did nothing but expound on some points about this Umm Kalthoum piece.
Generally, and in the Middle-East here, there's a saying that goes:
"اللي ما بيسمع لأمكلثوم, ما بيسمع."
Trans.: One who doesn't listen to Umm Kalthoum, does not listen." Meaningly, they are audibly-challenged.

Totally agree. Unfortunately, it seems a lot of the current singers - as well as their audiences - have lost the ability to listen...