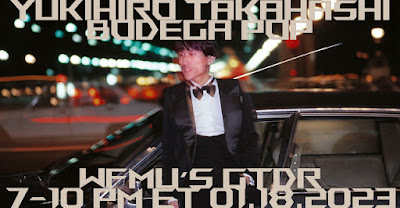 TONIGHT from 7-10 PM EST on WFMU's Give the Drummer Radio: Yukihiro Takahashi was best known in the United States for his work in Yellow Magic Orchestra and his subsequent solo career. But the prolific drummer and vocalist was involved in some two dozen outfits over the years, including sixties group sounds unit The Fingers and older brother Nobuyuki’s early seventies soft-rock band Buzz. This show will sample from all five-and-a-half decades of the late, great artist’s career.
Listen to the show and join the conversation
Posted by Gary at Wednesday, January 18, 2023