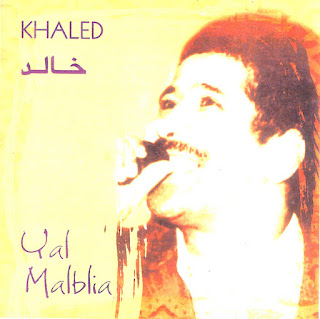 Listen to the title song

Reupped, due to the supreme awesomeness that is this album, here.

[Originally posted on April 29, 2012.] A very rare CD of early cassette recordings of what technically should be Cheb Khaled songs from 1979, when he was 18-19 years old. If you only know Khaled's later, over-produced work of the late 80s and 90s, this is going to be a revelation.

Found in Bay Ridge at one of the now-defunct Arabic music shops that used to dot Fifth Avenue below 70th Street.
Posted by Gary at Sunday, September 15, 2013

Sweet! I have an LP from '88 called Kutche and I love it but it definitely fits your description of "over-produced." I'm excited to give this one a listen.

...thanks for these early Khaled sounds. Nice interesting selection of music I will probably listen to more than just one time. I actually wish more of his early releases will see some kind of re-release. Don't even mind about the 80ies, late 80ies stuff... the 90ies and from then on get really really "over-produced" (kind of same thing with Soca music - which I have been listening to a lot lately... so difficult to find the real good gems... but there are certain 70ies and early 80ies productions which are just beautiful! Musically and lyric-wise). Just check out this beautiful song "king short shirt - press on" from 1979: http://www.youtube.com/watch?v=kvbP0cO7owI - - - Here a part of the lyrics - so beautiful:

Press on, Press on

And violence come out to play

Press on, Press on"

Holy crap, DubMe, that King Short Shirt song is totally fabulous! (Listening to the YouTube you linked to now.)

hi... thanks! looking forward to those khaled oldies but goldies. I will share that "king short shirt - press on" on a soca/caribbean disco vibes compilation I am kinda working on (one i finished writing my thesis - 4 more weeks to go!). Had to install itunes on my laptop to download that king short shirt song from itunes. Only place I could find it. Didn't know itunes was such a pain in the...

Wow Gary - thanks for this! I would never have thought from the cover of this that the recordings were so vintage. I remember buying that "Rai Rebels" compilation when it was new. It has a fantastic photo of Khaled on the cover, fronting a big orchestra with violins, a qanun and an accordion. I was disappointed that the recordings on the album didn't sound anything like that. Now, years later, it's great to hear what that picture looked like!

Correcto mundo, ma friend: that comp wasn't up to much sunff when it came out; especially to 'Originalists' like you. Most of the music that was comped at Raï Rebels was taken from his very late 80's to mid-90's work. The realy early stuff made by Cheb Khaled was anything between 1975-1978 (he played with a Raï band called Al-Azhar, or The Flowers plus many other ensembles, then duetted with some Raï female singers, until he finally went solo around 1978).

Around the blogosphere, one can find some of his earlier cassettes. I actually thought that you must have seen these around. If this is not the case, just kindly, let me know and I shall provide you with the links (both for DLing and the post-links).

Many regards, Gary and Tim.

The very first 4 tracks ever pinned down on a 45 RPM record were made in 1975-74 (Album: Le Royaume Du Raï - Trig Lycée, or 'The Road to School'), featuring a very young Khaled (no Cheb, as he was only 14 at that time), and these songs are his earliest ever, so be sure to dig'em (plus a handful of early cassettes) in a special post by yours truly in a dedicatory thank-you gesture to Gary's Khaled Week. I shall provide you with the link soon.

Some of his earliest albums are still downloadable from DepositFiles. Check these links 'fore it gets too late to be too late to do that:

Compilations:
Some wonderful Raï compilations can also be found here ( http://rai-music.livejournal.com ), most links work. Dig this one made by El-Houari: Ancien Khaled
http://rapidshare.com/files/168434299/ANCIEN_KHALED_-_RARE-compiled_by_houari.zip

F.n.: I shall have him a special post at my own blog-page that will describe in detail his life works and music, but in the meantime, Gary's doing a fine job here with introducing you to this Algerian singer's first works/albums even if they aren't the first ones to true 'originalists'. By way of mentioning this word... I have to remember Tim Abdellah.

Thanks, Hammer. I think this is the original blog source for a lot of those:

Indeed, Gary. It's one of those Russian multi-thread forums that hack into world cultures and post music by the truckload regardless of copyright and what-all. It's a good thing, though. Or, used to be anyways: some ex-bloggers used it like Holy Warbles to garner some limelight from re-posting these links as his (most Russians are nerdbags that insist on upping audio-files in FLAC which is what H.W. used to do as well), but alas, he's gone now and so are most of these Russian websites.

I am working instead on the earliest albums that are unavailable to DL from the web. Not an easy job as I got myself entangled up with at least 14 cassette drops to feature at my post that I shall dedicate to your person and esteemed efforts. And, none of these 14 is available as a DepositFile save from Nensa Souad (the very first one on top of this list), and Anajit Anajit (original release).

My fingers hurt at the mo'. Lol. I might not finish this enormous job tonight, although I wish to. But... See ya 'round, Gary.

Wow, amazing collection, Hammer! I added your Audiotopia URL to the Rebetiko post as well, hoping a few more Khaled lovers see it ...

Good Khaled is so hard to find. Thank you!