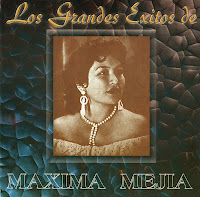 [Originally posted on March 12, 2012.] Several weeks ago, bored on a Saturday or Sunday, I decided it was time to revisit one of my favorite areas of Queens: Jackson Heights east. Basically, this means taking the 7 train out to the 82nd Street stop and walking east more-or-less along Roosevelt for 10-20 blocks or so. I won't go into the details of that trip, except to say that every single CD store that I used to frequent there when I was making more regular trips was gone. Most notably, the bodega with the wall of Ecuadoran CDs where I found this morning's offering. [Note on July 28, 2013: On a much more recent trip to the same area, I found a different store that I'd missed before -- I'll be posting some especially fabulous Ecuadorean CDs from that trip soon, perhaps even this evening.]


I know zip about Maxima Mejia other than that she was from Ecuador and sings passionately. And that I've been meaning to post her greatest hits CD here for quite a while, as I think you're going to like it.

I was hooked already by the instrumentals, and then I heard her voice. Wonderful.

Many thanks for this! I have always been a great fan of her Ecuadorian compatriot Julio Jaramillo. Maxima covers a lot of the same terrain in this recording. Fantastic!

Maxima Mejia is my great great aunt and i listen to her music constantly so thank you posting this :)

How the Hades did I miss this the first time around? I really do have to ball out my intern. Thanks G!

Well Im not sure how it is now but Roosevelt really got funky when you passed Junction Blvd.

I used to go into the boticas there- you know the shops that cater to Santeria.

I have been living in Ecuador since 1999. Havent found out much about Maxima yet but I can tell you that although this style of music is still popular, many people think that its music of the cantina; i.e. music to get drunk by----sort of your Ecuadorian Blues......and of course the king is Julio Jaramillo.

If I get any specific info Ill drop a line.

Once again- thanks for allowing me to continue to walk the streets of Astoria and Jackson Heights through your blog.

I picked up more Julio Jaramillo as well ... I've got a busy week, but will hopefully be adding several new items to the shelves this weekend.