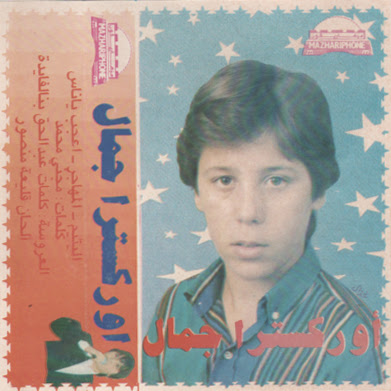 Thrilled to have re-ripped this amazing cassette at true speed in FLAC. Details below. Thanks to Tim at Moroccan Tape Stash for transliterations and details.
Grab it here.
Original post:
Confession: I went *back* to Nassem Halal Meat and Mediterranean Grocery here in Astoria, and, after a long conversation with Houssain, found another 40 grime-encrusted cassettes hidden in Nassem's nooks and crannies. Well, technically 38, as two of them were duplicates of a Zehouani tape I'd already picked up, but which was too old and worn to play. These cassettes come from Algeria, Egypt, Iraq, Lebanon, Morocco, Saudi Arabia, Syria, Turkey, and United Arab Emirates. As you've already suspected: Today's offering is from that last haul.

Thanks to the supercollector known as Mehdi J Blige, we know this is by Orchestra Djamal (or Jamal). Thanks to the J-card, we know the publisher is Mazhariphone. Thanks to our ears, we believe this might be the single most psychedelic cassette we've ever heard from al-Mamlakah al-Maghribiyah.

It's possible that this is the same Orchestra Jamal as in this video:

The sound is vaguely similar and the lead vocal is in the same youthful ballpark as on the tape. Speaking of which, let's talk about the tape in depth. 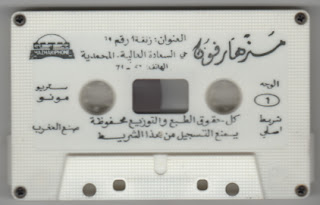 Side 1 kicks off with a plaintive, haunting string solo, aching and bending upward, until it opens a window for the lead male's voice, and a guitar that lays down a soft-strummed, spider-web thin scaffolding reminiscent of Omar Korshid at his most subtle. The kid's voice, as you'd gather from the cover above, is youthful, almost feminine. He starts off reciting and, as the track develops, begins to sing. At which point, any concern I had that this might be some kind of novelty or vanity project evaporates. The kid has soul. Deep, lived soul.

Just shy of the two-minute mark, the percussion and some sort of barely perceptible keyboard kick in. The drums -- which are nearly isolated in the mid-to-left-hand channel -- sound like a Moroccan Jaki Liebezeit is taking them out for a test drive. I have never, never-ever, heard a kit being played like this on a Moroccan recording. (If we're lucky, Tim might let us know whether they strike his more acutely trained ears as unusual.) The guitar lopes along, breaking out into occasional fuzz-toned fills.

The second track is where things start to get mind-melty. I don't know the specific instrument that opens the track, but it's some form of keyboard or synthesizer, and very trippy. The strings and Jaki Liebezeit kit kick in, followed by a sudden trill of mechanized ululation that swooshes across the sonic landscape. The kid and an adult male chorus trade phrases.

This is not psychedelic in the normative sense. The architecture feels rooted squarely in Moroccan chaabi; it's in the fills and trills where things get freaky. 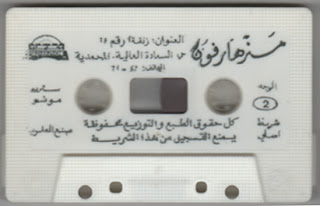 And it's on Side 2 that the psychedelia gets turned up, especially the second and final track. I'm not going to attempt to describe it, other than to note that the synthesizer and guitar do things in this 11+ minute scorcher -- and we're still *technically* talking fills -- that make my head spin.

And perhaps, dear reader, your head as well?

Link to the cassette rip in comments.
Posted by Gary at Monday, November 30, 2020

Wow, great tape, Gary! It's definitely the same Orchestre Jamal as in the YouTube clip you posted. Here's what I get from the j-card/shell:

Also, the Mazhariphone label shows an address in Mohammedia.

Another great post! And I see you're in Astoria too! haha.. amazing. I just wrote about that in my last comment. Thank you. Best, paris

Thanks for this post :)
Just to correct the name of the group, it is: Orchestre Jamal not Orchestra Djamal
In morocco we don't press the pronunciation of the letter "J" but in Algeria they do so "Jamal" becomes "Djamal" ... Since this artist is from Morocco his name is written as Jamal.
Here's a card from another of his album where we can see clearly how it is written: https://imgur.com/gallery/PGPXmIZ
Here's a video clip for one of his best success songs: https://www.facebook.com/mazicca/videos/1704846629538198/UzpfSTE1NTI0NTE2MTE6MTAyMjA0ODc5Mzk2OTkxNjI/