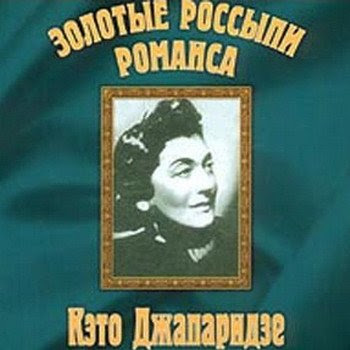 I know zip about Keto Dzhaparidze, other than that she was apparently Russian and had a fabulously soulful voice. Found in a Russian media store on Macdonald Avenue under the F line el.

I'm guessing these recordings date from the early 20th century, maybe the early teens to twenties. Would welcome any info any of you out there might have.

UPDATE: See the comments for more info. Apparently she was Georgian, not Russian, and these songs are a bit later than I had thought, 30s-40s.

She is, in fact, Georgian, born in Tiflis (Tbilisi) in 1901, and lived most of her life in Georgia, but toured a lot throughout USSR. She studied vocal from school, graduated from Georgian conservatory and did more private study, meaning to go into opera, but started a professional career only in 1935, when she was 34, singing gypsy music, art songs and pop songs. These recordings are probably from late 30s - early 40s, a peak of her popularity, which then declined more for political reasons than any others. In 1950 she started working in Georgian philharmonic. Died in 1968.

You're welcome! I've been a fan of What's in My iPod for a long time.