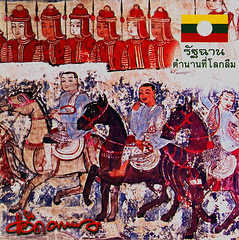 Four songs from the CD above.

Download the entire CD in a single zip file here.

I don't take the current situation in Thailand lightly. I had long ago planned to upload this CD, which I found in the previously mentioned Thai store in Manhattan's Chinatown--on Mulberry? Elizabeth? Below Canal, at any rate.

It is, to me, one of the oddest CDs I've ever picked up. Half of the songs--every odd numbered song, beginning with #1--is a Bob Marley cover, but sung in Thai. Every other song--the even numbered songs--are what I believe are original songs, also in Thai.

Surprisingly--or perhaps not so surprisingly--it's actually exceptionally well done. Having spent my formative years in the 80s in San Francisco and Berkeley, I was pretty sure that I never, ever, ever, ever wanted to hear Bob Marley again. That was admittedly before I knew there was a band in Thailand covering his songs.

It would feel crassly hand-wringingly holier-than-thou to dedicate this upload to the Thai protesters, so I won't.

I believe that all the songs are "translations" of Bob Marley songs. Thank you for this one & for your delight-ful blog.

You are probably right. I must admit that my knowledge of Bob Marley's music goes no further than what I heard in the 80s in every single cafe in the San Francisco Bay Area. (Which, actually, was kind of a lot!)