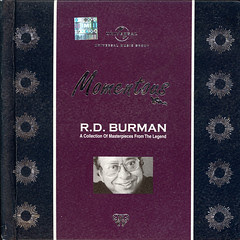 I found this compilation the last time Nada and I were in Chicago, in an Indian book/video/CD store on Devon Street.

Rahul Dev Burman, better known as RD Burman, was the son of the famous and successful Bollywood composer, SD Burman, and the husband of one of Bollywood's most famous singers, Asha Bhosle, who sang more than 800 of RD's songs. Considered the last great innovator of Bollywood music, Burman took inspiration from anywhere and everywhere, and often used unconventional instruments, such as the bottles you'll hear being blown into in "Mehbooba Mehbooba," or--in a song not included in Momentous--water, being gargled by Asha as she sang.

Formally trained in his childhood, RD's music was all over the map, ranging from Bollywoodized Indian classical to rock to disco to funk to jazz to Bengali song to--you name it. He plagiarized shamelessly, always making what he stole distinctly his own. See, for instance, this Web page, which offers numerous samples of RD's music along with what inspired it. (Listen, for instance to "Mehbooba Mehbooba" next to Demis Roussoss’s "Say You Love Me." A clear case of lifting, but there's no contest as to which is the stronger version.)

He died fairly young--at 44, in 1994--at a time when his career was on the outs. But, in the 15 years that have followed he's gone on to become the single most remixed Bollywood composer of all time. Even younger people who don't know they know his songs, know his songs--or at least re-versions of them.

Given the breadth of his work, this CD is hardly representative, but perhaps a nice entry. Note: You may have to scroll up on the playlist, which for some reason seems to want to start you out with the 8th track rather than the 1st.
Posted by Gary at Saturday, April 24, 2010