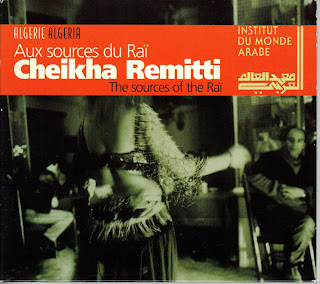 Listen to "La Camel"
Get it all here.
An absolutely sublime collection by the legendary grandmother of rai. Born in rural Algeria in May of 1923, orphaned at an early age, Rimitti began singing with a troupe when she was 15 years old. She recorded her first records in the 50s, scoring a hit and gaining notoriety with "Charrag, Gatta" (the 9th song in this collection), which implores young women to lose their virginity. ("Charrag, Gatta" means something like "tear, lacerate.") While we think of such a thing as remarkably brave (even suicidal) in an Islamic country, it bears reminding how depraved musicians and performers in Algeria were already considered. Until a later religious awakening, Rimitti could be said to have been playing into the stereotype of the sheikha.
Over the course of 50 years, until her death in 2006, she recorded more than 400 cassettes, 300 singles and 50 78s, essentially creating the model for what is thought of as modern rai. Read more about her here.
Found in Paris many years ago, perhaps at the Institut du Monde Arabe, but more likely at a used CD place somewhere.
Posted by Gary at Sunday, May 20, 2012

i love Cheb Khaled and the other stars of modern rai but this is my kind of rai,primitive,hypnotic and totally badass and Cheikha Rimitti was the queen.thank you for all the amazing music you're posting.keep up the good work.

Gary, this is so kickass! Best thing I've heard all week. Anymore like this?

I posted another Rimitti CD here:

but these two are the only ones I have. I can do a bit of digging around online and see what else I can find ...

I do, however, have some other older Algerian stuff that I should probably start posting ...