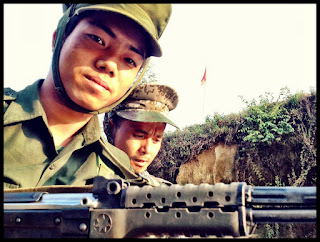 Get all 18 totally kick-ass Burmese rap and hip-hop tracks here.

I know that one ought not look a gift horse in the eggs before they're hatched, but let's just cross our fingers and say that, inshallah, there might soon be a flurry of music from this insanely musically advanced culture hitting the aisles of your favorite bodega here.

Meanwhile, I've been going sort of crazy with FileTram. Y'all know about FileTram? Well, I'm sure there are other search engines like it, but for whatever reason, FT, which was just launched last year, is the one I discovered first and the one I presently feel most comfortable using.

Using. For what? Why, for finding music I can't otherwise seem to locate via Google, of course. What's beautiful about this engine is that whatever you type in, it will search not only sites like Mediafire and Rapidshare, but also the sites that link to the file, and both appear in the results. So, for instance, let's say you loved the Seagull Screaming Kiss Her Kiss Her comp I posted last July and want to see what else is out there. You could do a search by the band's name and, say, "rar," and discover this. (But don't click through to any of the results; instead, cut and paste the URL in green and plop it into a new window. Trust me on that.)


N E Wayz. So, I've been doing a bit of hunting. And gathering. And sifting. And, now, posting.


Rap and hip hop were slow to catch on in Myanmar, though Myo Kyawt Myaing started rapping a bit in the 80s. It took the four-member band Acid to release the first all-hip-hop record, Sa Tin Gyin, in 2000. Since then, the genre has really caught on in the world's 24th most populous country; I was able to dig up dozens of single albums and rap mixtapes on FT, most of whose original homes (e.g., the websites that linked to the files themselves) had vanished.


This weekend, when I wasn't out basking in the sun and hunting down Issan restaurants, I weeded through my findings, ultimately boiling it all down to the comp you're quite possibly downloading for your own give-it-a-listen now.
Posted by Gary at Tuesday, May 29, 2012

Thanks so much Gary! For the music and the info. A while back I found some links in the comments section of one of your posts for White Shoes and the Couples Company and absolutely love them! But my favorite song gets cut off on the particular copy of the album that was in one of the downloads - so I tried searching for them and really couldn't come up with anything. I'll try this and see what I come up with.

Ok - you've ruined me. But in the best possible way a person can be ruined. :)

Oh, my. This is terrific.

... and I still have Fez City Clan top of the pops.

you can find some of Burmese/Myanmar music at myanmarmp3album.com. There are a lot of Rap/Hip-Hop songs, but some are also copies of Western artists.

first thing... thank you...your blog has become a goto destination when i wish to go down the internet rabbit hole.

second thing... do you have an intended track order for this mix... any tags got lost in the unpacking.