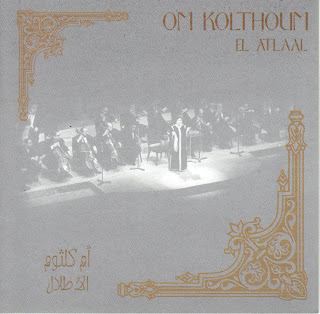 "El Atlaal," or "Traces" "The Ruins," with music composed in 1966 by Riyad al-Sunbati and lyrics derived from two poems by Ibrahim Naji ("El Atlaal" and "El Widaa," or "The Farewell"), would prove to be one of Kalthoum's most popular songs. Virginia Danielson devotes several pages of The Voice of Egypt to this song, describing how Kalthoum mashed up Naji's two poems, turning the quatrains of the first into triplets. She also describes some of the song's  specific resonances:


Several of the climactic lines took on political meaning: "Give me my freedom, set free my hands! I have given freely, I held back nothing. Ah, how your chains have made my wrists bleed. ..." In 1966, these lines were perceived by some as addressed to the repressive measures of 'Abd al-Nasir's government. After the Egyptian defeat of 1967, they took on a wider meaning, suggestive of the bondage in which many Egyptians felt the entire Arab world to be held. The lines were repeated 'everywhere,' as listeners assigned them new meanings. Over time, Umm Kulthum and her listeners moved the poetic meaning between romantic and political themes.

This toggling of meaning between the romantic and the political in popular music is not unique to Kalthoum and her audience. Cui Jian still maintains that "Nothing to My Name," which served as an anthem for the Tiananmen Square protesters in 1989. (Ironically, Cui Jian was one of them, despite his own protest that the song had no intrinsic political meaning.)

This CD, which I've had for some time, was likely found at Rashid Music at its last location, on Court Street in Brooklyn, though it could have also come from Princess Music in Bay Ridge. Given it's status of one of the diva's most beloved of songs, I thought I'd top off the evening with it. I've more of her recordings and, perhaps tomorrow I'll up a few more--or may save them for another day.

And here she is singing the song in Paris in 1967:

Gary: you were spot-on right at your analogy for the politico-romanticism of this song.


Al-Atlal is a poem written by Egyptian poet Ibrahim Naji (, إبراهيم ناجي, who was a doctor by profession); the word means literally, 'The Ruins' which is this imaginary, old ruined place, old Arab poets used to imagine standing at for a while to stop, stare, and mourn a lost, loved one since pre-Islamic times of Jahillyah (the Dark-Ages).

The other poem (Al-Weda'a: the Farewell) used in the Umm Kalthoum piece was also written by poet Ibrahim Naji, for an Egyptian dancer and singer (Name: Zozo Hamdi El-Hakim, or Zozo The Artiste for short). The poet's daughter attested later that the girl in question was his 'calf-love' interest: a neighbour girl named Iffat who's French and one he couldn't have told of his love until she got married and then he had a sentimental breakdown causing him to write the 'farewell' poem.

Al-Wada' (الوداع) wasn't sung for the first time by Umm Kalthoum: the first one to sing this poem as a whole unit was singer Najat Ali who recorded this song in March, the 7th, 1954 one year after his death. Ibrahim has always wanted Umm Kalthoum to sing any poem of his, but alas, he didn't live long enough to see it. He was so enamoured with The Lady of The East so much that he dedicated his second volume of poetry to her (called 'Layali El-Qahirah': The Cairo Nights). He wrote only three volumes during his life.

Umm Kalthoum sang seven couplets of Al-Weda'a (Farewell), and she embodied these into Al-Atlal starting from the famous line "Hal Ra'a Al-Houb Sukharah? Mithlana?" 'Has Love Seen Such Drunkards? As We?'... and then went back to sing from Al-Atlal... cut... and sang again from Al-Weda'a as if it was a wine chalice she kept drinking from, singing in total 25 couplets from Al-Atlal and only 7 of Al-Weda'a.

This elasticity is known in Arabic poetry as A'ttadhmeen— 'Incorporation'. It's a trick done when two separate poems have the same musical rhyme (so-called in Arabic as The Sea, or 'Bahr Al-Ouroudh'). Naji's poems shared the same "sea", namely Bahr Al-Raml (Sand Sea) in which he wrote most of his poems in quatrain couplets (Note: it's easier to mashup any music/poem using this style, by the way).

Al-Atlal was chosen by the Le Monde as one of the best 100 works of musical artistry for the last century. A-Sunbathi; the poems' music-composer used many maqamat to write this piece: Al-Hazzam/Rahat Al-Arawah (beginning-middle-end) starting it off with Rast/Farahnalak (a C-note maqam), followed by Hazzam (another C maqam), then Awjj using some Nahawand in its middle, right into a qanoun solo in Rahat Al-Arwah, which is followed by Bayati-Dogha/Bayati-Shouri, Iraq Maqam... until where the Lady begins her singing.

The next musical intermission sees a roster of these maqamat (Kurd, Saba, Nawathir, Nahawand...) until she begins the poem lines from which you have quoted Virginia Danielson's writing, ""Give me my freedom, set free my hands!"" The Nahawand changes into Rast, then Suznak, Shahnaz, Kurd, Yikah, ... until she begins singing the fiery couplet from Al-Weda'a "Hal Ra'a Al-Houb Sukarah..." which always has sat her audience in a rousing bout of clapping and shouting frenzy whenever she began singing it.

The end is much mellower than this fire-and-brimstone harmonically boisterous standing ovation where she slips into an ad-lib of Farah-Fazah Maqam settling on the Hijaz which is really a very stable (and exceedingly solemn) maqam that holds the whole thing in one piece (that, or the cup in her hand to drink from it more and more). Between Bayat and Rahat Al-Arwah, she finds herself surrendering to what some critics described as a three-year fight to decided what should she use as the 'qafla' (ending section) between her and Sunbathi. He was adamant that she should use a very high-octave one, but she didn't want to end one of her songs in such an off-tangent vocal-chord roustabout. She cowered finally after three years to his suggestion using the Nahawand/Rahat Al-Arwah maqam to end the piece and this is exactly why this song saw such indescribable success.

Three whole years to put to song one poem (or, yes two...)? This is rarely found anywhere else outside the Arab world. Umm Kalthoum sang this piece in April, the 7th, 1966 at Dar Cinema Qasr El-Niel (The Nile Palace Cinema House) with Ahmad Al-Hefnawi on violin, mastero Mohammed Abdu Saleh on the qanoun (zither), plus many who saw The Lady cry literally shedding her tears after the music was over and the audience broke into a deafening 'clapture'.

After the hafla was over, she asked her chauffeur (his name was Ahmad) to take her to A-Sunbathi's house, immediately. When his wife opened the door she was amazed to see Umm Kalthoum there at the door crying and asking for her husband to see. Sunbathi was asleep, and in his pajamas as he walked to greet her, only for Umm Kalthoum to take him in a tearful hug much to the amazement of his half-awake family.

Egyptian writer Moussa Sabri described Al-Atlal as, "The Moses Staff that swallowed all songs." Indeed it was and still is. Umm Kalthoum was also quoted admitting that, "This was the only song which really frightened me." fearing that she was unable to sing it in such a legendary way as she did at that date.

That very date was so ominous: it was the first time where the Al-Qasabghi's chair was seen vacant on the theatre's stage: he died at the same year in March.

Wanna know something more amazing? Umm Kalthoum sang that piece at the age of sixty-eight! Imagine?


Here is the first ever recording of Al-Atlal for you, Gary. It's the 'fullest' version ever clocking here a staggering 1 hour and 45 minutes:
http://www.mediafire.com/?mplk01u43exq43w


Thanks a lot, really. You are a man of a great musical intelligence and an always-passionate adherence about what you do in your life. I salute you.

Thanks. You're making my week (/year?) with this stuff.