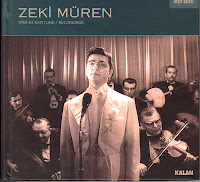 I found this unimpeachable treasure in the late 90s or early 00s at a Turkish music store in Manhattan not far from Curry Hill (Bogaziçi Video, 35 East 21st Street, 2nd floor). I was taken there by the poet and translator Murat Nemet-Nejat, who may have alerted me to its existence and who may also have encouraged me to pick up this particular item. (Murat edited and translated most of what is and will be for some time THE book of 20th century Turkish poetry in English, Eda. Read a review of this essential collection here.)

Müren recorded more than 600 records, cassettes and CDs; this collection includes, according to the liner notes, "his early radio recordings removed from commercial concern, which represent Müren's admirable performance when he was in the prime of his musical career."

Grab both discs in a single RAR file here.

What follows is all from Wikipedia:

Zeki Müren (born in Bursa, Turkey on 6 December 1931, died in İzmir on 24 September 1996) was a prominent Turkish singer, composer and actor. He was famous for his compelling voice and precise articulation in his singing of both established Turkish classical music and contemporary songs.

Müren grew up in the provincial capital city of Bursa in western Turkey. From 1950 to 1953 he studied decorative arts in Istanbul at the Fine Arts Academy while launching his musical career. Müren’s first album was issued in 1951, at which time he was a regular singer on Istanbul Radio. In 1955, he produced his first Gold Record.

In his forty-five-year professional career Müren composed more than three hundred songs and made more than six hundred recordings. He was celebrated as the "Sun" of classical Turkish music and was affectionately called "Pasha". Many of Müren's records were also published in Greece, where he also enjoyed popularity, along with the U.S., Germany, Iran, and several other countries during the 1960s and 1970s.

Müren was also a gifted poet, publishing Bıldırcın Yağmuru (The Quail Rain) in 1965. Additionally, he acted in Turkish cinema, starring in eighteen films and writing many of their musical scores. Even though he did not consider himself a painter, he painted as a hobby.

Müren dressed effeminately, wearing large, ornate rings and heavy make up, especially in the later years of his life. In many ways, he had a pioneering role in rendering the Turkish society more accepting about homosexuality. He, with his distinct style, remained a highly respected artist throughout his career, and in a sense, paved the way for many later, more openly gay or transsexual Turkish artists. His visual style shows many similarities with Wladziu Valentino Liberace.

He died of a heart attack during a live performance on stage in the city of İzmir on September 24, 1996. His death caused the greatest public grief in years and thousands of Turks attended his funeral. Zeki Müren Art Museum, established in Bodrum, where Müren used to live, has been visited by more than 200,000 people between its opening on June 8, 2000 and December 2006. All his worldly possessions are donated to the Türk Eğitim Vakfı (Foundation for Turkish Education) and Mehmetçik Vakfı (Armed Forces Foundation for Disabled Veterans and Families of the Martyrs.)

Listen to a song from the same period

Oh my is this lovely. So dreamy and romantic. As usual, Gary, you have sent me on a head-long hunt for more information and music. (Nice additional info here.) Thank you so much!

So glad you like it, G! And thanks for that link; I love the phrase, when the author sees Zeki's image on a cassette: "By then, Muren was well past the definition of 'over the top' and working into peculiar."

Thank you so much! This is fabulous!

Gary, thank you very,very much for the music - it is indeed lovely.

Gil, thanks for the link to the Nomadic Subject. All sorts of fun things over there :-)

check this one out if you liked zeki muren
http://www.youtube.com/watch?v=lJclnOqLCI4