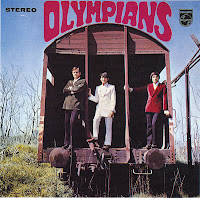 GMV, or Greek Music & Video Inc. (25-50 31st Street, Astoria, NY 11102), is a self-described "superstore" about four or five blocks from my apartment here in lovely Astoria. GMV lives up to its self-description; as far as I can tell, they're the single largest retailer of Greek music in the New York City area. Remember Tower Records? These guys are like the Tower Records of imports from the Hellenic Republic.
Despite GMV's proximity to my home, and despite my love for all foreign music burned into optical discs of polycarbonate plastic, I admit that I don't stop in much at GMV. The reason is simple: Other than CDs from Japan, these are the most expensive imports I've ever encountered. It's one thing to pick up five CDs at $2 each from a tiny Burmese store off the 7 train ... even if only one of them is great, you've only spent ten bucks. Greek music typically retails at anywhere from $20-26 for a single CD.
This time, I was lucky. Now, we all know you can't judge a CD by it cover, but when I saw this one, I pretty much assumed it was going to be delightful. It is.

The Olympians are one of three bands mentioned in the 60s Rock section of Wikipedia's Greek Music page. From what I can gather, this collection is a compilation, including songs from 1966-1970. The CD itself was released in 1994 and seems to have more or less vanished from the face of the earth. (I wasn't going to post it if I had been able to find it anywhere online.)
Listen to the first track on this CD
Get it here.
Posted by Gary at Sunday, February 05, 2012

I'm in favor of any Venus covers. I would collect any I can find!

The Olympians' title of this song on the album is "Το Κορίτσι Του Μάη," which I think means "The Girl of Spring" ... perhaps because Venus is a Roman goddess? But, then, they could have titled it Aphrodite.

I don't know my mythology well enough to know whether or not the girl of spring is related to Aphrodite or not ... perhaps some kindly Classics scholar will stop by and clear this up.

I just used this list to find a pretty cool cover by Finnish band Belaboris.

Found a track listing! From http://www.trehantirimusic.com/the-olympians--no1-10652-p.asp

Oh, awesome--thanks for the track list! I'll maybe put that into the body of the post this evening ...

Thank you.
I'd been looking for song #16.
It's a rare B-side that I'd heard in the 1970s but was unable to get a copy of.
There's a YouTube video of the single [Olympians-Symposio].