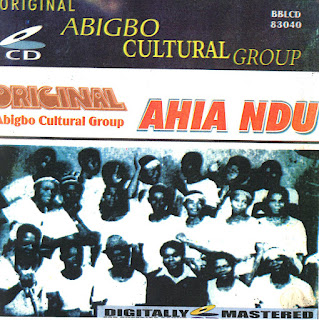 [Originally posted June 12, 2012.] Abigbo is dance music of the Mbaise Igbo, who live in southeastern Nigeria. I'm starting to think that the women who run Blessing Udeagu, where I found all of this recent music, are either from Igboland or have ties there.

Patrick Radden Keefe's The Snakehead, which chronicles the rise and fall of one of the most notorious human traffickers in history, explains that, while the first wave of Chinese in America was Cantonese, the second, beginning in the 1970s, was from Fuzhou, the capital of the Fujian province. Most of the Chinese in Manhattan's Chinatown are Fujianese, if that's the right word. And most of those who aren't are Cantonese. Imagine a reverse wave of American immigrants into China, all from, say, New Orleans. And Boston.
Posted by Gary at Saturday, July 06, 2013

Fantastic. Love this LP,thanks for posting it!!!