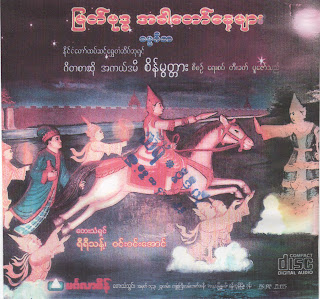 Reupped, because it pains me to think of you without it, here.

[Originally posted March 2013.] Is innocence, as Graham Greene once quipped, a kind of insanity? I don't think so, but then why do I feel, whenever I listen to traditional Burmese music, like it's the most pure, but also the craziest, music I've ever heard? I mean, besides whatever Edward Said might have to say about that.

This album is so beautiful, beautiful in so many sometimes even conflicting ways, that it almost hurts me to listen to it. I feel like I'm simultaneously floating in a celestial pool of warm, dark-chocolate-and-mushroom-flavored saline AND having the insides of my bones scraped out by mallets made by stupid people preoccupied by stupid thoughts about how dumb mallets look.

Also, it makes me cry. I feel like McTeague, after hours weeping in his Polk Street Dental Office. Except there's this layer of consciousness where I can see clearly that innocence and insanity are not really bedfellows but rather hate each other just like humans. Which makes this music even more impossible, like "how can I get at this flypaper sticking in my head"?

Found a year or so ago at Thiri Video, Elmhurst, Queens, with Peter Doolan, who graciously transliterated the artists and title.
Posted by Gary at Saturday, September 14, 2013

i remember this one! i've been waiting to hear!
i will surely take a stab at the tracklist when time provides, but for now i can tell you our brilliant artists here are yi yi thant & win win aung.
thanks gary!

Thanks, Peter ... looking forward to it!

hey gary!
can't get the file to download, seems like divshare is having some issues. but for now, a quick update, the name of the album is "mya buddha, akha to nei mya"

Yeah, Divshare is doing maintenance this morning ... hopefully will be back up later today. Thanks for the title, I've added it to the post, as you'll see!

It seems to be semi-working now. It takes forever to load the page, but it eventually loads (at least on my computer) and the download starts.

finally downloaded!
here's the song names according to the back (note: only 10 tracks listed)

I was picking up food at this 24 hour vegetarian place in my neighborhood (Chelsea) , and I noticed they had a lot of CD's for sale on the left wall.

Thanks for the kind words, Mike.

I don't know this place. I just Google mapped and then street viewed the block; the only place that looks like a 24-hour vegetable place has a big green awning that says "Ha. Ha. Fresh."

"Ha Ha Fresh Corp," I said. He said, "Yeah--" followed by something I couldn't quite understand. (He had a rather thick accent.)

Is this the place you mean? Did you notice what kind of CDs they were, from what country/area of the world?

hang on. will get you the name!


As I said... they have a whole wall filled with (mostly) indian CD's ; stuff that looks regional..and (possibly) music from further afield.


Really obscure looking stuff. Think I even saw some CD-r's. ". Next time I go there (at 2 am!) I may have to blind buy one.

Yeah. now I see how vague my first comment was. I did not mention that it was an Indian ...vegetarian place. a cabbie stop. It harkens back to the NYC of my childhood, where this truly was "the city that never slept".


24 hour(quality) places are few and far.


and after the awesome, 24 hour, art deco "Empire Diner" failed at renegotiating it's lease.. this hood changed dramatically.

I had heard about this Indian place before...Passed by it on a regular basis...but never ventured inside.

Aha. Thanks for the clarification. Looks like it gets pretty solid ratings on Yelp!

Some say that I am a Quiet American who would enjoy Havana.

I prefer Howling at the city lights to having my teeth drilled on Polk.

As always thanks for the interesting assortment of ear candy.
Larry