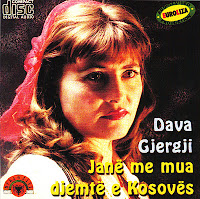 The first Albanian CD I ever bought, found at a little Albanian bodega on Church Avenue in Brooklyn. I know very little to nothing about Gjergji, other than the fact that she is wildly popular and has a magnificent voice. Since then, I've found a few other outlets for Albanian music in other areas of NYC, including a bodega and a CD shop across the street from that on Arthur Avenue in the Bronx and a small selection of CDs at the legendary Euro Market not far from where I live in Astoria. Someday, a sociology or anthropology scholar somewhere will write a dissertation in English on Albanian folk and pop that will be published by some academic press somewhere and then, maybe, I'll have a bit more context for this music.
Get it all here.
Posted by Gary at Tuesday, December 20, 2011